This Place Is Making You Beer 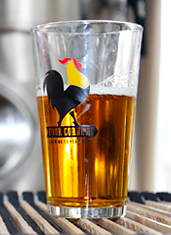 No, that’s not a thinly veiled political reference.

Believe it or not, we’re talking about actual bridges.

You know, civil engineering, trusses and whatnot.

And how sometimes, when you’re really lucky, building one gives you direct access to a brewery.

The Dallas beer scene is... small. You can count the breweries on one hand. So percentage-wise, this place is giving you, like... a bunch more breweries. And this one’s stashed inside a warehouse. Also inside that warehouse: all the shiny contraptions and gadgets that produce two really drinkable beers they’re calling All Day Ales. (Challenge accepted.)

Those beers: Local Buzz, a golden ale crafted from rye grains and honey. And Red’s Roja, a malty and hoppy ale that’s great for drinking on, oh, let’s say this Thursday, when both beers are unveiled at the Common Table. So start there, and down the line, look for them at fine suds-slinging establishments like Eno’s and Goodfriend Beer Garden.

Or just visit the brewery. Because beginning November 17, Four Corners is open for tours. So stop by to see their digs, sample their wares and gently caress a mash tun or two.

Or three. Get crazy.

Leisure
Tight Spot
A Barbershop with a Bar in Back

Leisure
Thrilla in the Villa
One Private Villa, Coming Right Up

Leisure
In Congress
A Hotel, Three Restaurants and a Rooftop Pool

Leisure
This Spud’s for You
Sending Your Correspondence via Potato

Leisure
Noble Endeavor
A Comfortable Place for All Things Beer