Icing on the Cake

Fully Sauced Cupcakes on the LES 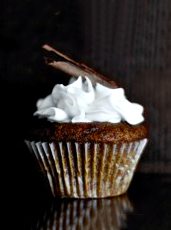 You’ve heard all that stuff about not putting all your eggs in one basket.

Turns out, it doesn’t apply to bite-size cupcakes filled with tobacco and scotch...

Hold out one empty hand and another filled with money for Prohibition Bakery, a room on the Lower East Side whose sole purpose is to create cupped cakes imbued with plenty of spirited beverage. It’s open right now.

Right, so let’s get to it. Two enterprising ladies by the names of Brooke and Leslie started this thing with a few crazy recipe ideas and a healthy love of drink. Now, after a couple years of paying their dues on the artisanal flea circuit, they’re in the show. The show being a wee storefront with a couple ovens, a couple counters, a class photo from 1925 and a jar of powder marked “magic.”

Out of that humble setup come national treasures like salted margarita, Irish car bomb, White Russian and scotch-and-cigar cupcakes. All of them with real booze or tobacco crammed in after the cooking process is done, which translates to a rough conversion of three tiny cupcakes to a shot of alcohol (so yes, you’ll be carded).

Let the indignant cries of “I’ll tell you when I’ve had enough cupcakes” begin.