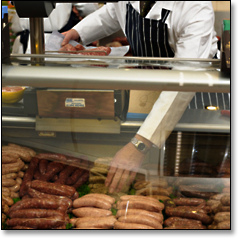 You never thought you'd say this. Or even think it. But sometimes another burger sounds a little...boring.

Expand your carnivorous horizons with some rattlesnake, buffalo or alligator on a bun—all of which you can sample at the strange new sausage den called Wurstküche, soft-open today.

Once you finally find the random, blink-and-you'd-miss-it door (it's on Traction Avenue, despite the address), you'll feel more at home knowing you're near go-to sushi haunts like Zip Fusion and R23. There are just a few sidewalk tables for now, and a couple more in the brick-and-beam dining room that's about the same shape (and size) as a Trivial Pursuit wedge. But you didn't come for the atmosphere—you came for crazy cuisine like Alligator & Hickory-Smoked Pork Andouille Sausage. Or maybe a Rattlesnake, Rabbit and Jalapeño with an Allagash White, one of the two dozen or so rare beers on tap. (Because as everybody knows, rattlesnake just doesn't resonate with macro-brews.)

You'll also want some Belgian fries, so you can try dipping sauces like Strawberry Ketchup, Citrus Ginger Mayo and Chipotle Aioli. And if all this puts you in the mood to dance (why wouldn't it), you should know that down the hall there'll be a full bar area in a few weeks.

Where your moves will be suitably exotic.