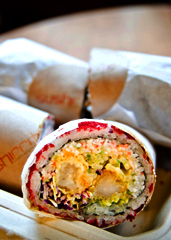 Yes, Sushirrito has a sequel. A second outside-the-box-thinking burrito outpost, and this time, it’s gracing the other side of Market Street.

So, yeah, you’re more than familiar with the shoebox, standing-room-only SoMa spot and its Mission-burrito-sized sushi rolls. And that’s pretty much what you can expect out of this FiDi joint. Plus a few actual seats. And a classed-up woodsy vibe.

But you’re coming here for monster sushi/Thanksgiving-sized lunches. And for that, we suggest something like the Cali Loco. It’s a riff on a California roll but with fried cream cheese (and shrimp tempura, if you ask). Oh, and it’s humongous.

If you’re craving a burrito in its truer sense, your closest option is the Porkivore with oven-roasted pork belly and melted Swiss. You’ll want to augment that with Lava Nachos—a heaping pile of brown rice chips, extra-spicy tuna, pepper jack cheese, guacamole and sriracha aioli.

So heaping, you might forget you’re eating brown rice chips.

The Cobblers Are Here to Save Your Shoes