Bull-Running Advice from a Hemingway 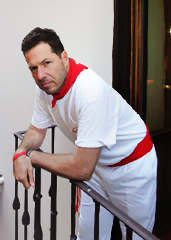 The whole week’s a nonstop party. “You meet friends, you make friends, if they don’t show up, you meet someone else,” he says. “People always ask, ‘How many hours of sleep did you get last night?’ ‘Oh, three. That’s not bad.’”

Well, except the running itself. “If you partied all night, you better be able to wake up and be in some sort of condition to run.”

There are a few simple rules: “You have to be 18. Don’t touch the bull. You can’t be drunk. And if you get knocked down, stay down.”

Leave the running shoes at home. “I just wear Converse.”

It’s over before you know it. “It’s two and a half, three minutes at the max.”

“Whether you’re a good runner or a bad runner, you could have bad luck. But that’s like crossing the street in NYC—you [could] get hit by a car.”

The people are more dangerous than the bulls. “You’ll get knocked down. You’re gonna get scraped, you may break a bone. It gets kind of crazy, with everyone pushing and everything.”

Events
Up the Anti
Meet Your 2014 Anti-Resolutions

Events
Masked and Anonymous
Five Masquerade Balls Worth the Trip