Getting to Know the Man Behind Ron Swanson 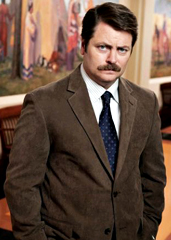 You probably already know something about Nick Offerman. Illinois native. Plays laconic meat-lover Ron Swanson on Parks and Recreation. Owner of the second-greatest mustache ever displayed in prime time. (But watch your back, Selleck.) As he prepares to perform his one-man show American Ham next month, we wanted to give you some other important data on the man—and the ’stache.

He’s from a small town in Illinois called Minooka. Don’t mistake it for Pawnee. “Pawnee would be more like a Joliet,” he says.

He has a BFA from the University of Illinois.

Don’t arrive late for his new show: it features minor nudity right at the top. “Yeah, it really packs ’em in.”

It also features anecdotes, woodworking tips and songs. But it’s not stand-up comedy. “I consider myself more of a humorist.”

He lived in Rogers Park in the mid-’90s. He knew Amy Poehler. But he had never seen an improv show until his mid-30s.

His key to a good mustache: “Rub a dollop of animal fat into your whiskers. Then comb. Repeat.”

He can also build you a canoe.

The one place he’d take Ron Swanson for a night on the town in Chicago: Gibsons.

Where he’d take himself: Moody’s Pub for a cheeseburger. “It has a great courtyard. It feels halfway to Middle Earth.”