Bacon and Pie Under One Roof 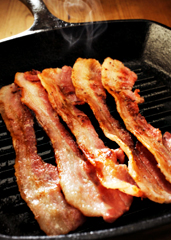 Three days from now, you’re going to overdo it.

But honestly... that’s nothing.

This is overdoing it: Bacon Bacon and Three Babes Bakeshop, your new one-stop bacon and pie laboratory, opening softly this week in Cole Valley.

By now you’ve picked up enough Bacon Bouquets and Spicy Belly Fries from the Bacon Bacon truck and benefitted from a standing Salty Honey Walnut Pie delivery with the Three Babes to know that this little combo takeout shop is going to streamline your gluttonous pursuits.

Basically, they’re inviting you into their working, standing-room-only kitchen every morning and afternoon, when you’ll be dazzled with things beyond what you’ve already had from their mobile ventures (like nine-inch chicken pot pies and complete breakfasts of bacon-Swiss croissants and cheddar-bacon scones).

As they get up to speed this week, the Bacon Bacon truck will be parked outside the kitchen for breakfast and lunch on Wednesday, while the Babes will be inside dishing out pies Tuesday through Thursday.