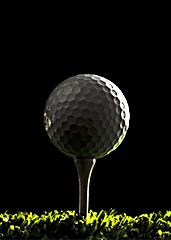 Your golf game: honestly, a thing of beauty.

But since you deal only in cold, hard facts, you may want proof.

Yes, basically, we’re talking about the technology that Peter Jackson used to turn a short British actor into a shorter practically naked little Middle-Earther named Gollum in Lord of the Rings—though you’ll (probably) be fully dressed during this process.

You’ll book a time, and then drive yourself down to Olympia Fields Country Club, that south suburban bastion of high tech. You’ll be taken into a room where you’ll be fitted with reflective sensors on strategic parts of your body and your club—which is the exact process Christian Bale went through when filming Batman (just substitute your golf clubs for a grappling hook).

Then nine cameras create a 3D rendering of you and your swing, which allows you to pick apart your technique from 25 different aspects. You’ll be able to make precise adjustments, so that the next time you and Jordan are sharing a caddie, you can totally dominate him.

Not to mention that crazy-hard windmill.