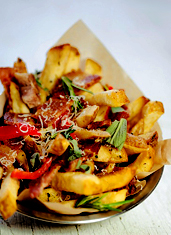 Bacon has been taking on many forms lately.

But really, you just want to eat it. And if it comes to you, sure, okay.

Introducing the Bacon Bacon Truck, a roving temple of bacon delivering sandwiches and bouquets of bacon to the streets of San Francisco, launching at Off the Grid in the next two weeks and booking private events now.

You might be envisioning a truck wrapped with images of sizzling bacon, but these guys chose to be slightly more discreet (slightly). So instead, keep a lookout for a black truck with a pink grill (since pigs are pink) and retro detailing that’s somewhat reminiscent of something from Miami Vice.

You can order from a regularly changing menu (crafted by a Michael Mina vet) of a half-dozen sandwiches as well as fries. Try the Bacon Bacon Burger with a side of dirty fries (that come with fried pork belly trimmings) or one with pork belly and a fried egg. And even if you’re not a dessert guy, go for the chocolate-covered bacon strip.

While the truck’s slated to hit the streets soon after the long weekend, you can arrange for them to pull up to your next party.

We hear they kill it at weddings.