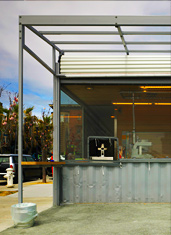 Look at it out there. Not exactly ice cream weather.

Good thing we’ve found something that’s not exactly ice cream as you know it...

Imagine a typical ice cream parlor. Now imagine its total opposite—a 40-foot shipping container cut in half and lined in panels of hemlock, giving it the feel of an industrial lab. Or where the Clockwork Orange crew would get a sundae.

What Smitten lacks in a quaint, old-school creamery vibe, it makes up for in futuristic touches like nitrogen tanks and four patented Kelvin machines. That’s where they pour the ingredients—anything from chocolate chips and cookies to spicy Mexican chocolate—to make your dessert. It all whizzes and whirls for no more than 60 seconds, leaving a nitrogen fog that forms extra-small ice crystals—bad for slushies, great for ice cream.

You’ll want to get it in a pizzelle cone. They make them in-house and plug them with an assorted selection of top-secret “edible stoppers” to ensure the ice cream doesn’t drip from the bottom of the cone.

We’ve already said too much.

Get This Alcohol-Laced Ice Cream Delivered to Your Door