Highway to the Danger Zone

Driving 200 Miles an Hour Across the Mojave Desert 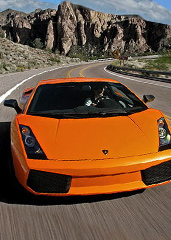 Over the winter, you’ve gotten a little rusty.

In particular, it’s been at least four months since you had a chance to race a sports car through the desert at blinding speeds.

But we’re here to say winter is over…

Introducing Supercars in the Mojave, your chance to take a spin in some of the fastest vehicles known to man, now taking reservations for March 22 and beyond.

The vehicles: seven top-level sports cars (including an SLR McLaren, a Ferrari F430 and a Lamborghini Gallardo Superleggera) and one last-minute surprise. (More on that shortly.) Your mission: drive the cars past the 200 mph mark and, after screeching to a halt, dramatically remove your sunglasses. (It’s not a hard mission.)

You’ll meet up on a former military airstrip in the Mojave Desert, and spend the day running speed trials until you’ve sat behind the wheel of every last car. Then, you’ll wake up the next morning, head to an airport in Van Nuys and hop into that surprise: a Soviet L-39 fighter jet. The gent in the front seat, an ex-military pilot, will take you on an aerial tour of the Pacific coastline—but he’ll let you take control for a while once you’re safely in the air.

Travel
You Can Vacation with Hafþór Júlíus Björnsson
Aka "the Mountain" from Game of Thrones. Aka the Strongest Man in the World.

Travel
Austin's New Otis Hotel Has in-Room Turntables and a Vinyl Library
Stay Here During SXSW. Or Whenever.

Travel
A Floating Hotel and Spa With Views of the Northern Lights
Yep, You're Going to Sweden

Travel
Your Own Private Enclave in the High Desert
Sound Baths, Stargazing and Snoozing on Boulders in Joshua Tree

Travel
A Mystical Mexican Resort With an In-House Shaman
It's Part Beach, Part Jungle, and All Relaxing

Travel
An Attractive New Adults-Only Hotel on Miami Beach
Stay Here for the Super Bowl. Or Whenever Suckling Pig and Champagne Sound Good.