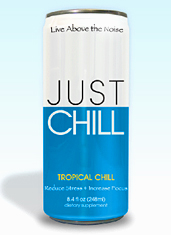 Eleventh-hour renegotiations. Several fires to put out (including one actual fire). Meetings in Santa Monica, Downtown and Malibu. In that order.

You need to call in the big guns to help you Zen out—by which we mean a fleet of surfers...

Think of this as the anti-Red Bull. Instead of dosing up on caffeine, the goal here is to calm down and focus, become one with the universe... that sort of thing. (It’s the kind of energy drink you could see Phil Jackson kicking back with.) The guys behind this grew up cutting waves in Santa Monica and Malibu, and they wanted to bring some of that transcendence to your workday. Sort of like a surfboard in a can.

Inside there’s Siberian ginseng (a mood balancer), lemongrass (a stress and insomnia reliever), vitamins and something called L-theanine, which is said to promote alert relaxation. But all you’ll really taste is a subtle hint of peach and mango. Cans just hit Whole Foods shelves this week—or you can get a case of 24 shipped your way online.

Think of it as a monster wave.