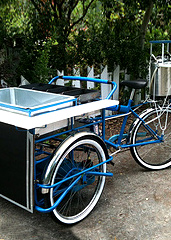 It's happened too many times to count.

You're sitting in Dolores Park, enjoying a rare bit of sunshine, and it hits you: an insatiable hankering for an octopus taco.

Clearly, there's only one thing to do. Wait until someone bikes up and makes you one. On his bike.

We're happy to say, your wait is over...

Introducing the Taco Bike, a three-wheeled mobile taqueria set to roam the streets of the Mission every weekend.

There are three things you need to know about the Taco Bike. One, you'll know it when you see it—bright blue trike/taqueria hybrids tend to be hard to miss, especially when said hybrids include prep surfaces, cold storage and commercial-grade griddles. (And, we suspect, one truly exhausted guy pedaling the thing.)

Two, it's brought to you by the people behind the Mission's cult seafood shack Weird Fish, so you can expect the same twisted tortilla-filled goodness. (Think grilled pineapple and ginger-marinated fish tacos.)

Three, while we expect you'll find this thing roaming the mean streets of Dolores Park or 18th Street, you can be 100% sure you know where it is by following the bike on Twitter.

Which really beats following it on foot.