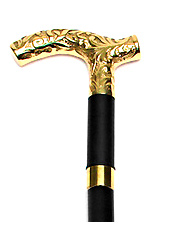 You miss your plane, you commandeer a chopper. Your cocktail is offensively subpar, you hop behind the bar.

And now, if the stadium only stocks cheap beer, you fake a limp. Bear with us...

Consider it the best reason to fake a limp since you played the role of Keyser Söze in a Tony-winning adaptation of The Usual Suspects. In short, it's exactly what it sounds like: an aluminum, gold-handled cane that's been hollowed out to fit not one, but five two-ounce flasks, which you can then fill with the beverage of your choosing. (Just hope no one asks why your cane is making a swishing sound.)

It's not hard to see how this would come in handy. You can use the flasks to mix and match—two bourbons, two scotches and, why not, one champagne. Or fill one with OJ and start making mimosas. (You've always wanted to do brunch at a state funeral.) And it's all housed inside an innocent-looking cane made by Harvy, the same brand that probably made your grandparents' walking sticks.