You and Circa Brewing Co Are Going to Get Along Swell 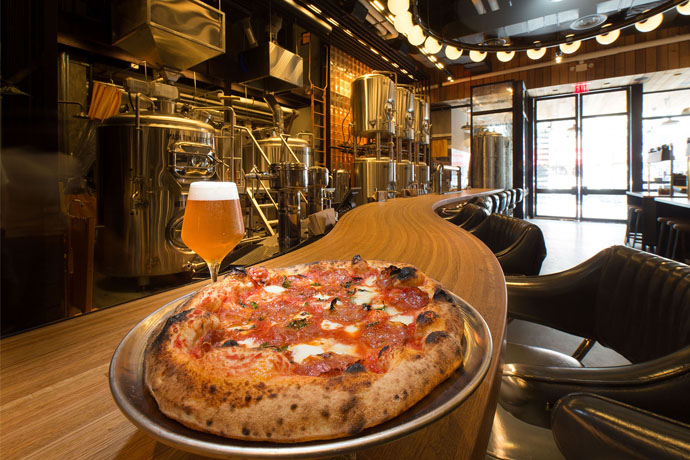 20 Photos Circa Brewing Co
Twelve brews made on-site, shufflepuck and wood-fired truffle-béchamel pizza dunked in a pot of pork jus...

Put them all together and you’ve got Circa Brewing Co, a laid-back space for meaningful conversations over beer made a stone’s throw away and surprisingly good wood-fired pizza, opening today in Downtown Brooklyn.

Here’s what to know:

The beer program is helmed by a Six Point Brewery guy.
His name’s Danny Bruckert, and he’s making things happen like an East Coast-meets-West Coast House IPA, a Nitro pale ale, and ten other brews made in those tanks you see right behind the 70-foot-long oak bar.

Right, um, there’s a 70-foot-long oak bar.
The whole spot’s got an upscale warehouse vibe, which we just made a thing. Wood, steel, concrete, seven massive brewing tanks, giant ceiling fan. There’s a private tasting room if you want to do something along those lines, too.

Growlers, flights, other things you’d expect at a brewery:
They’ve got ‘em.

But you don’t have to go the straight beer route.
If you’re feeling more like a mezcal-honey-egg white-tamarind soda cocktail, say the words For Goodness Sakes. And also “I’ll have a.” If you want a beer, maybe with coconut tea rum and lime also in the glass, they call those Tropicalé! around these parts.

You may or may not want to leave with one of the staff’s tees.
They were created in part by the illustrators behind albums and posters for Mac DeMarco, Dinosaur Jr, and Kurt Vile. So yeah, they’re cool. And also, available. Lucky you.

Have a look at the space, food, drinks and the like, right here.