I Know This Great Little Chinese Restaurant. It’s in Peru. 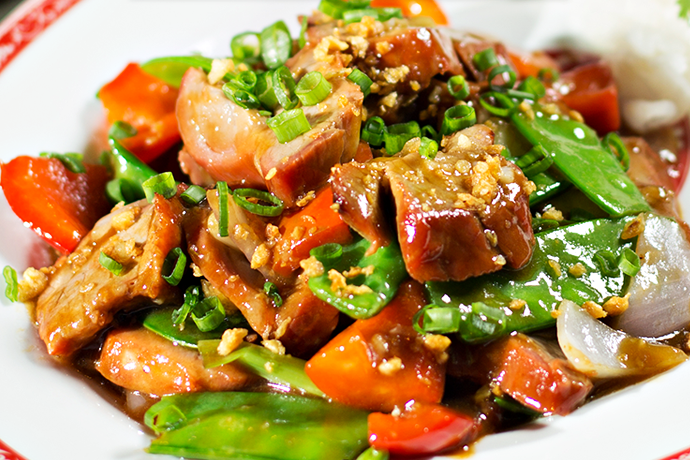 After nearly 10 months traveling through Europe and Latin America, when asked what I miss most from home, easy access to a diverse cornucopia of ethnic food, especially Asian food, almost always tops the list—landing somewhere between “friends and family” and “being able to watch MTV’s The Challenge on an actual TV.”

To be fair, I haven’t been completely deprived of the stuff.

After overdoing it with Spanish fare in Barcelona one week, my friend and I sought out a dingy, hole-in-the-wall-type Chinese restaurant and gorged ourselves on soup dumplings and perfectly greasy egg noodles.

And in Prague, of all places, I frequently enjoyed the best Indonesian food I’ve ever had, at a homey little lunch spot where giant oval-shaped platters populated with tasting-size portions of tender, spicy beef and lamb, a green bean salad and a generous portion of rice cost about $5.

The majority of my international stops, however, did not come close to matching the bevy of Asian restaurants I’d grown accustomed to while living in Chicago.

That is, until I arrived in Lima. To my surprise, Peru’s capital city is densely packed with Peruvian-Chinese restaurants, and is home to one of South America’s oldest Chinatowns, Barrio Chino. Coming off two months in Colombia—a veritable Asian food desert—the city’s myriad options felt like a kind of salvation. An MSG-spiked, high-sodium salvation, sure. But a salvation nonetheless.

Chifas, as they’re called, first started popping up in Lima around 1920—largely a result of the massive wave of Chinese immigrants that came to work in the sugar factories a half century earlier. Today, thousands of these restaurants dot the city. So ingrained are they in the local culture that several signature chifa dishes—like arroz chaufa, a Chinese fried rice best drenched in a cream-based spicy garlic sauce, simply known as ají—have become a legitimate part of traditional Peruvian cuisine.

While Peruvian-Chinese is not greatly dissimilar from Chinese-Chinese, don’t expect to find easily recognizable dishes from the American-Chinese cookbook in Peru. There are no kung paos or cashew chickens or Mongolian beefs here; and that sticky, deep-fried bastard, General Tso, won’t rear his head. But I have seen Peking duck, dumplings are popular, and the chifas deploy familiar ingredients like ginger, soy, chili oil, scallions and sweet-and-sour sauce in service of delightfully grease-lacquered stir-fries and noodle dishes. I’ve also noticed, at least in a few of the nicer places, that classic Chinese restaurant aesthetic: white tablecloths, strong A/C, lazy Susans, no music and those random side or back or upstairs rooms where nobody ever seems to sit. (“Why is this here,” I always wonder, before proceeding to quell any further existential Chinese-restaurant-related questions with mounds of steaming fried rice.)

A few classic chifa dishes include a Peruvian-Cantonese wonton soup (sopa wonton), chicken chicharrones with spiced lemon juice (chicharrón de gallina), the aforementioned arroz chaufa and the tallarín saltado, which is basically Peru’s version of chow mein. It’s heavy on onions and peppers, and its kissing cousin, lomo saltado—more or less the same thing, with white rice instead of thin noodles, plus fries and beef—is, next to ceviche, probably Peru’s most famous dish.

During my time here, I’ve managed to visit my fair share of chifas; in my two remaining weeks, I’ll probably hit a few more. I could suggest a couple, like Madam Tusan (Gastón Acurio’s small upscale chain), or Wa Lok, or Chifa Titi, which has been around for more than 50 years. None will steer you wrong.

But recommendations for chifas can be futile, as the best ones are often those that appear before you like garlic-sauced beacons in the night, presenting themselves when you’re at your hungriest and tired from walking the streets. Because as often as you find them, sometimes, the chifas find you.

I think I’ve been eating too many fortune cookies...