Vermouth Hour Is the Best Hour of the Day

Why We Should All Live and Drink More Like Spaniards 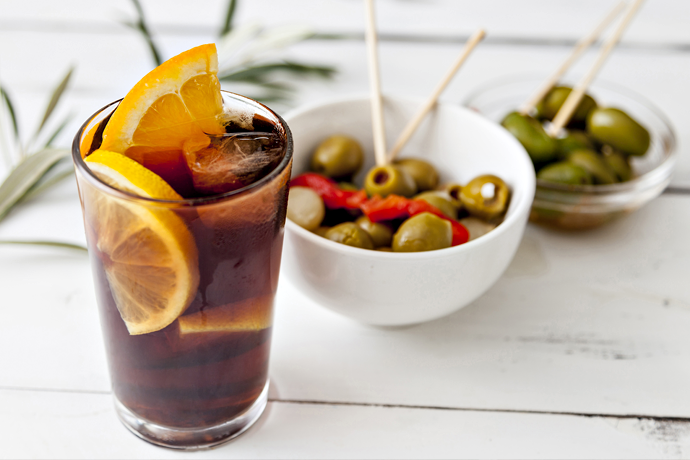 Somewhere around my second before-lunch drink on my third day in Madrid, it became apparent: these people know how to fucking live. The young, the old, the professionals and the pensioners, all gathered together in sunny plazas and crowded bars, day drinking with impunity. And their midday drink of choice: vermouth.

Vermouth is best known as that herbal, bittersweet addition to martinis and Manhattans. But in Spain, it’s a drink unto itself. Usually the red stuff, consumed over ice or occasionally with a dash of sparkling water or tonic, and often with an orange slice. And much like craft cocktails and craft beers have enjoyed a stateside renaissance over the last couple decades, vermouth—the onetime Spanish favorite that’s been in decline since the ’70s—is back in fashion. So everywhere you look, provided you’re looking through the hazy bottom of a glass, you’ll see dozens of bottles lining shelves and bars pouring it straight from the tap.

“La hora del vermut” translates to “vermouth hour” and is that very special time before lunch when all the hard leisure-ing locals come out of their homes or offices to enjoy a midday drink and snack. It’s magical. And it doesn’t carry with it a stigma of alcoholism. Rather, it’s social—a way to interact with your fellow thirsty people and recharge for the day ahead. And I may just be projecting here, but isn’t that something we could all benefit from?

A few things to know about vermouth hour:

1. You don’t have to drink vermouth. You can still join the fray with beer, wine or a gin and tonic. The act of “taking a vermouth” is more about the time of day and the collective exercise. What you drink is up to you. That said, drink vermouth. Its low-alcohol sensibilities will ensure your day doesn’t end here.

2. It’s not technically an hour. It’s just that golden time of day before you eat lunch. Which, in Spain, rarely occurs before 2pm.

3. You don’t drink without eating. It just... doesn’t happen. You can order a snack, but you’ll often receive a gratis plate of something simple with your drink, like olives or potato chips. It’s damn civilized.

4. It’s cheap. Glasses of draft vermouth are typically available for between one and two euros, making it an economical way to spend your time.

Vacationing in Spain isn’t so much different than vacationing elsewhere. You eat, you drink, you walk, you see some sights... and all of it is a fine way to absorb the country and its culture. But those prelunch drinks are the perfect opportunity to sit back, relax and assess all that you’ve accomplished. Which, at 1pm, might not include more than breakfast.

But there you sit, with a cold glass of vermouth in hand, a side of olives, maybe some fresh boquerones swimming in a shallow pool of olive oil and vinegar... and you realize: most of these people aren’t on vacation. This is just how they live. And it makes you wonder: am I doing it wrong? Are we all doing it wrong? Would life be better if I’d been born in Madrid or Barcelona or Valencia? Surely my Spanish would be better, and I’d master that lispy “C” sound so people don’t look at me like an imposter when I say “Barcelona.”

Better yet: maybe America could just adopt a more lax policy on day drinking. Offices would close up shop between the hours of 1 and 3pm, and everyone would adjourn to their nearest patio or bar for a glass of wine or vermouth and a salty snack before moving on to a leisurely lunch, which is really just a stepping stone to a late, lengthy dinner where more wine happens, and gin and ibérico ham flow freely.

Now we just have to get everyone on board. Or maybe stage some kind of massive walkout, wherein we all leave work to inhabit our local bars and request an inexpensive glass of local draft vermouth. And then get quizzical looks when our local bartender has no idea what the hell we’re talking about. Or why we’re sitting at their bar when they don’t open for another three hours.

Anyway, I don’t profess to know all the answers here. I just miss Spain.