Checking the Hype at Leuca and Miss Paradis 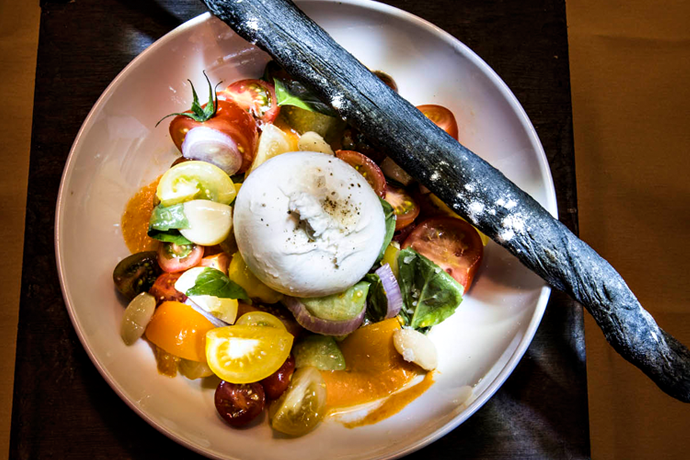 19 Photos Leuca and Miss Paradis
By now you’ve probably heard tell of Leuca, Andrew Carmellini’s first Brooklyn restaurant, and Miss Paradis, a Philippe Starck-designed Nolita cool-kid eatery. These are bound to be places you’ll see models Instagram from soon enough, so it behooves you to learn what they’re like in real life. That being said, we went, so you don’t have to. You probably should though. Here’s a breakdown:

The Story
Leuca: Carmellini is now the bread of the sandwich that is the William Vale in Williamsburg. Up on the roof, there is Westlight, for cocktails. In the foundation: this warm expanse of Italian fare.
Miss Paradis: A French restauranteur and his daughter came here, found a corner, and had Philippe Starck, probably one of only a handful of industrial designers you could name, build a restaurant there.

The Setting
L: Carmellini’s places are, by and large, pretty vast by New York standards. But in Brooklyn he’s working with even more real estate. This particular real estate looks like the pseudo-subterranean spawn of Lafayette and Little Park, with vast expanses of light woods, ornate columns, very distinct bar and dining areas, and a shocking amount of natural light for a place that’s half-underground (for your breakfast/lunch consideration).
MP: It is truly one of the more interesting designs we’ve seen this year. We’ll describe it as a futuristic, bi-level lunch counter with a small second floor gallery. It’s our best shot. There are beautiful photos later.

The Meals
L: Kind of a Locanda Verde vibe going on here, food-wise, but with more of an emphasis on the sharing restaurants want you to do so badly nowadays. Wood-fired pizzas and pastas are front and center (menu here), spicy sea urchin spaghetti being a particularly savory example. For dates, or for deep depressions, there’s a dessert called the Sophia Loren for Two—a monster of a sundae with espresso gelato, chocolate sauce, caramel, rum granita, and whipped cream, topped affogato-style with a shot of espresso.
MP: “Healthy Mediterranean.” And it is. A pescatarian menu that includes activated charcoal bread with preserved garlic and a sesame-eggplant spread (they call it the Piaf spread). Seafood paella for two. A butternut steak with curry. That’s right—squash as steak.

The Drinks
L: A typically well-thought-out list of Italian wines and cocktails that skew toward Italian liqueurs. You could easily just come here for a pre-whatever Williamsburg drink or two and leave happy.
MP: This is a classic case of not having a liquor license yet gone right. Elderflower-infused rosé sounds like something someone you’re dating would enjoy. Soju and sake cocktails also feature prominently.

The Crowd
L: Your 2016 Williamsburg mixture of the neighorhood folk, the visiting Manhattanite, the international hotel tourist, the foodie and the generally attractive. None of those being mutually exclusive.
MP: Mix one part Sunday crowd at Cha Cha Matcha with two parts that crowd on its way to a Fashion Week party. Sprinkle older European couples on top to taste.

The Quirks
L: Large black and white photos of a small Italian girl making funny faces at you.
MP: A cutesy menu format (see here) and a giant silver apple on the roof, pierced, presumably, by a giant William Tell, by an arrow.

The Photos
Right here for both.