Aren’t You Supposed to Unbutton Your Suit Jacket When Seated? 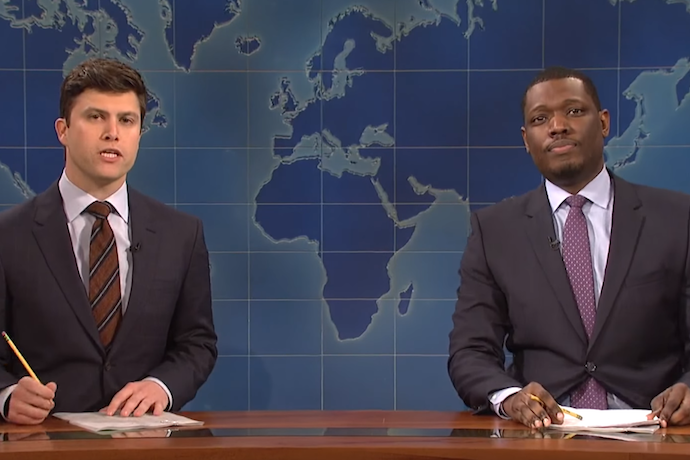 We are living in uncertain times.

Especially when it comes to the old rule of thumb: “You should unbutton your suit jacket when seated.”

You’re seeing the rule broken everywhere these days: during pre-, post- and mid-game reports; on Weekend Update; even on Tom Ford during his latest press rounds.

Yet keeping your suit jacket buttoned while seated seems precarious at best and impractical-to-possibly-dangerous at worst. And you’ve got questions. Well, at least one question:

Luckily we’ve got answers. Well, at least one answer. Followed by at least four more. Okay, five answers. Here they are:

So, what’s the deal with all these guys lately, usually on TV, keeping their suits buttoned while seated, in blatant disregard of possibly the oldest sartorial rule of thumb in the book?
Here’s the thing with letting thumbs make all the rules: everyone's got 'em, and they’re opposable. Also, they usually only apply to everyday situations, for the sort of people who sit down at their desks to face a stack of TPS reports, not sit down at their desks to face a camera that beams their likeness into millions of homes. These seated buttoners are most likely trying to evoke the formality of standing and addressing their audience, even when sitting behind a desk or on a stage. And that actually kind of makes sense.

But they still look pretty bad, right? Tell me you don’t see all of that weird puckering and bulging and general cruelty to buttons everywhere you look. You do, don’t you?
Sure, most of those guys still look bad, but probably not as bad as they would if their suits were unbuttoned while sitting there on TV. There’s an air of formality that comes along with the buttoned-up suit that I think we’re taking for granted here. Also, there are ways to make it work, especially with the shorter cuts of modern suit jackets and higher button-stances. Those are things that can just as easily work against you though, and they’re all things that these guys should consider, but usually don’t, leading to this epidemic of eyesores. That photo of Colin Jost and Michael Che up above is a good case study of when it goes pretty much right and when it goes pretty much wrong. Jost looks fine while Che’s jacket is a host of maladies—the worst of which is the bottom of his tie peaking back out from under that button hanging on for dear life. It’s probably because his jacket is too small and has a center vent compared to Jost’s jacket that probably is double-vented. Again, these are all things that should be considered by on-air personalities but aren’t. There is hope. 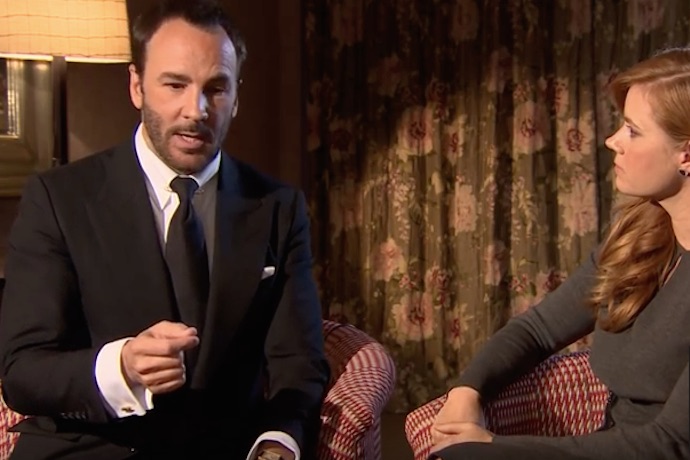 So you’re saying it’s possible to pull this off, with aplomb, even? Like Tom Ford did here during his latest press rounds for Nocturnal Animals?
Yes, thank you for throwing that off-the-back-board-alley-oop my way. Tom Ford looks at ease in his chair while still put together here for all the right reasons stated above. But it’s also worth mentioning that when you have to reach as high as Tom Ford for an example, there’s some advanced sartorial innerworkings going on. You see, at the root of the old rule of thumb is comfort. It was permissible for the buttoned-up set to give themselves a break while sitting. The idea was that there’s no reason to further discomfort yourself when nobody is watching anyway. Especially if it’s going to make you look worse. It should almost go without saying, but a suit is cut to look its best when you’re standing and have it buttoned, so start there.

I take all that to mean that I’m okay to unbutton my jacket while sitting wherever I damn well please, because I’m rarely ever in the national spotlight when I sit down?
Yes, by all means, unbutton your suit while sitting. Really, it’s not that big of a deal, tone it down. Of course, feel free to leave it buttoned if that works for you too. That’s the thing about personal style. It’s personal. And that also boils down to how a suit fits you, your body type and your own sensibilities. There’s nothing wrong with sticking to the rules, or breaking them—within the realm of good taste. Remember a suit is supposed to flatter the wearer, not feel burdensom.

Wait, but what about the few instances when I’m sitting and will be holding an audience, albeit a small one, like when I’m out to dinner with friends or colleagues?
Ah, good question. But, still, you can and should unbutton it, which is much better than ditching the top half of your suit entirely.

Um, okay, thanks?
That’s not a question. You’re welcome.