Anthony Bourdain Will Pass on Your House-Made Ketchup 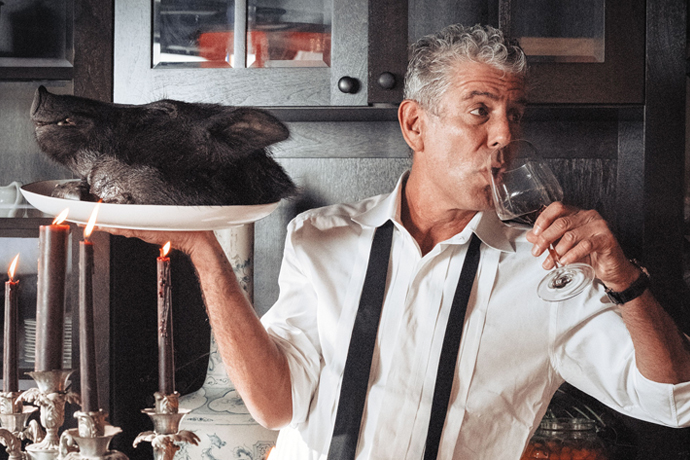 Few people will live a life as rich as Anthony Bourdain: the gifted story-teller and chef-turned-author who burst into the public eye with a New Yorker essay back in 1999, and ever since has continuously surprised and pleased the masses with his taste for adventure and penchant for sharing it.

And it's safe to say few people will be missed quite like Anthony Bourdain will be. He represented a sort of anti-celebrity chef. He embodied authenticity. He was brutally honest and raw; self-aware, imperfect and relatable. We wanted to be him; we were eager to watch him. He inspired so many with this seemingly innate ability to live fully, to experience other cultures authentically, and maybe most importantly, to not take or give any shit.

I had the opportunity to sit across from Bourdain and ask him some questions in a trembly, star-struck, baby-journalist voice back in 2016. I remember his energy being tangible; the kind of person you don't come across very often, who demands attention by simply entering and leaving a room. Not surprisingly, even fresh off of a plane from Asia, he emanated wit, intelligence and charisma. I was maybe more surprised at how humble and gracious he was—his vibe at times hinting at that no-fucks-given on-screen persona we know so well, but ultimately just fully, completely, and palpably...a good dude.

Below, a look back at the story that came of it.

I arrive at the penthouse suite of the Roxy Hotel, where I’m greeted with a tumbler full of scotch. I’m about to meet with Anthony Bourdain, while downstairs they’ll soon begin screening the newest episode of Raw Craft, a Balvenie-sponsored web series that highlights craftspeople who utilize traditional methods to produce exceptionally beautiful items, from classical guitars to cast-iron skillets to suede Chelsea boots—the topic of tonight’s episode. Bourdain is the host, and the show is just one of the many endeavors the chef turned author and television host is currently involved in. Curating the food for a massive food hall at New York City’s Pier 57 set to open in 2019, touring to support his recently released cookbook, Appetites, and continuing to travel the world for his CNN show, Parts Unknown, to name just a few. Safe to say he’s no stranger to multitasking.

Without warning or introduction, Bourdain bolts down the stairs, announcing his presence with a cheeky smile and strong shake of the hand. Navy blazer on navy T-shirt, a nondescript pair of black sneakers, a bit disheveled in a straight-off-the-plane, may-or-may-not-have-just-woken-up-from-a-nap sort of way.

And so we sit down to discuss his new season of Raw Craft, but not without me sneaking in a few questions on how Tokyo compares to tripping on acid and why he no longer despises the smell of pancakes.

In Raw Craft’s opening sequence, you say the term “handcrafted” gets thrown around a
lot. When did this whole craze start, and what do you think it was born out of?

Yeah, I don’t know. I guess restaurants started throwing the word “artisanal” around. That had a lot
to do with it—it was a turn inward. Some people were, in a very genuine way, looking backwards, looking at
the way things used to be and trying to recreate the way things were. They were looking to do things right,
looking to do things the old-school way. Then, of course, the existing industrial producers picked up on
that as a way to increase value.

We see a lot of unnecessarily artisanal or craft items in NYC—housemade pickles, cutting boards
made from felled Central Park saplings...

Ha, yeah. Is it better? That should be the guiding principle.

Right. At what point are people reinventing the wheel just to ride the wave?

I think a good example would be housemade ketchup. Is it better than the Platonic ideal of ketchup that we
all are emotionally attached to? How good do you want ketchup to be? I think the industrial product, in this
case, has powerful emotional connections that cannot be replicated, or bettered.

What do you look for when evaluating potential candidates? What is it that makes one rise above the
rest to be a good candidate for the show?

Integrity and determination. A personal vision. A good story. A certain kind of character—someone who
innovates, who’s made some really hard and maybe even foolish and romantic decisions to do something as
well as they can. You know, regardless of any other considerations.

Is there any craft or profession that you’d like to cover on the show, but you haven’t found the
right candidate yet?

What’s a natural talent you wish you had?

I just watched the Parts Unknown “Tokyo” episode last night and I thought your intro
was really spectacular—haunting, in a way. You compare your first trip to Tokyo to dropping acid for the
first time. Would you say the same about any other cities?

Nothing approaches Tokyo for sheer data overload and unknowability and density of stimulus. I mean,
there’s just so much coming at you and so much of it is unfamiliar and seemingly unlearnable and
unknowable and exciting. Their fetishes are for perfection. On the one hand, there’s so much coming at
you—and yet, in other ways, their notions of pleasure are so austere and stripped-down, devoid of
unnecessary distractions. I find that mixture really intoxicating.

Damn, I’ll have to make the trip.

What are some of your favorite spots to drink whiskey in New York City?

They’re shrinking and disappearing and going out of business. I do like Bemelmans bar in the Carlyle
Hotel—I love the murals on the wall there, that’s a great place.

And how do you take your scotch?

Generally speaking, neat. Every once in a while I’ll sneak in a single ice cube, which is heresy for some,
but I do it now and again.

What’s your favorite quick fix when you’re at home and hungry?

I’ll call out for a pastrami sandwich from Pastrami Queen. That’s the thing I want most when I’m
abroad for a long time. Even if I’m eating really well, when I get back to New York, that’s what I want
first.

How has becoming a dad changed your relationship with cooking?

Well, I’m cooking for somebody I love now. What I might want to cook is completely subordinate to what my
daughter is willing to eat, and what will make her happy. It’s not about me anymore, it’s not about
“the chef,” it’s all about the person I’m feeding.

Is your daughter a picky eater, or has she inherited your sense of adventure?

No, she’s very adventurous. I’m fortunate, I don’t know how it happened—I never pressured her to eat
adventurously. I just ate interesting food around her, and to my shock, surprise and delight, she frequently
expresses curiosity and is willing to try new things.

You famously hate brunch, but I see “how to make a perfect omelet” made its way into
Appetites. Has your stance softened?

Well, seeing the look of delight on my daughter’s face when I offer her and her friends a “pancake
bar” during their sleepovers makes me feel really good about the world. You know? I want to look good in
her eyes, and that’s a fast, easy way to do it. The smell of breakfast is no longer the smell of defeat
and humiliation; it’s a happy little girl and her friends—a little girl who’s proud of me.