This Pie/Cake Hybrid Is a Holiday Miracle 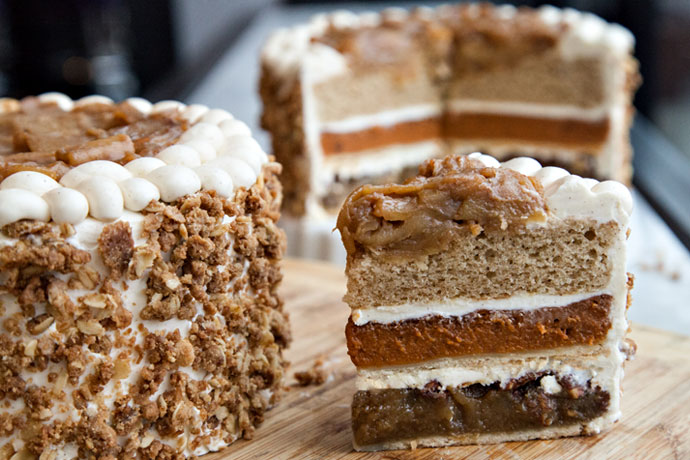 Some people think the holidays are all about spending time with your family and friends.

Those people are sadly mistaken.

Because the true holiday spirit can only be satisfied by taking individual things and smushing them together to form a new hybrid thing. Take the turducken, for example.

And now, take the PieCaken, which is an aptly named dessert that combines pecan pie, pumpkin pie, spiced pound cake, apple upside-down cake and layers of buttercream into the unholy creation you see above. It comes from pastry master Zac Young of Craveable Hospitality Group, and after a successful launch in New York last year, he’s offering it nationwide via FoodyDirect. It’s available to order now and it will start shipping on November 1.

Naturally, we had to try this for ourselves. Because we like pie. And we like cake. But do we like pie-cake? Very probably. Herewith: some comments heard round the office...

“I’m gonna bring this to Thanksgiving dinner and blow my mom’s mind.”

“This post-PieCaken sugar high does not seem to be subsiding.”

“The buttercream was definitely over-whipped, which gave it that buttery taste. I’m hoping it was an anomaly, but we might have to bring in six or seven new cakes for a consistency follow-up.”

“I have diabetes now, but it’s cool.”