Harnessing Sound Waves to Improve Your Beer. Sure.

All Beer Is Draft Beer Now Thanks to This Countertop Gadget 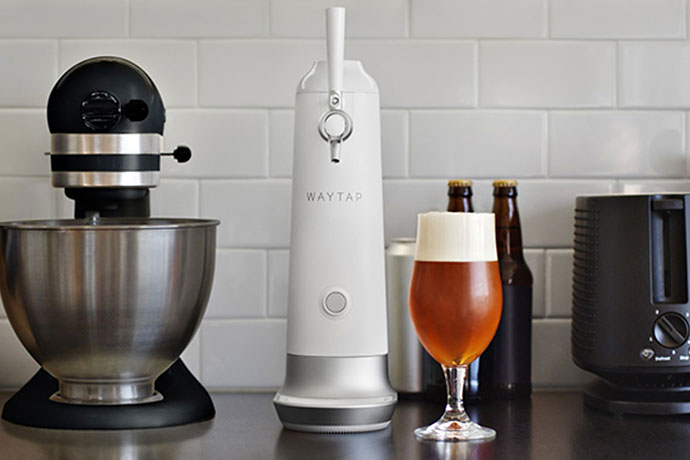 There’s nothing wrong with bottles and cans of beer.

Compact, easy to grip, contain delicious liquids... They get the job done.

Unless what you’re really after is draft beer fresh from the tap.

In that case, you’ve got a problem.

Or, as we like to call it, an opportunity. Because the Fizzics Waytap is not the name of a high school science club’s alt-rock band, but a sleek countertop gadget that turns any beer into draft beer. Go ahead and reserve one on Kickstarter now, and then clear some counter space for a December delivery.

These guys got their start the old-fashioned way: by pitching their idea to Mark Cuban on Shark Tank. And after an early version that looked conspicuously like a Keurig, now they’re back with this handsome beer-dispensing devil. Just place any open bottle or can into the machine, pull down the tap handle and let science take over. Because that’s when a sonic oscillator gets to work creating sound waves that make the beer’s bubbles denser. Which results in a creamier texture and a better taste. Which are things everyone can appreciate, even if they lost you at sonic oscillator.

And if you want some extra suds on top, just push the tap handle away from you to cap your beer with foam. Doing so will lock in the carbonation, thereby ensuring that the beer remains fresh from your first sip to your last sip.

At which point you’ll realize you need a refill.