The 10 Best Beers on the Fall Color Spectrum

Your Seasonal Musts, from the Lightest Ales to the Darkest Stouts 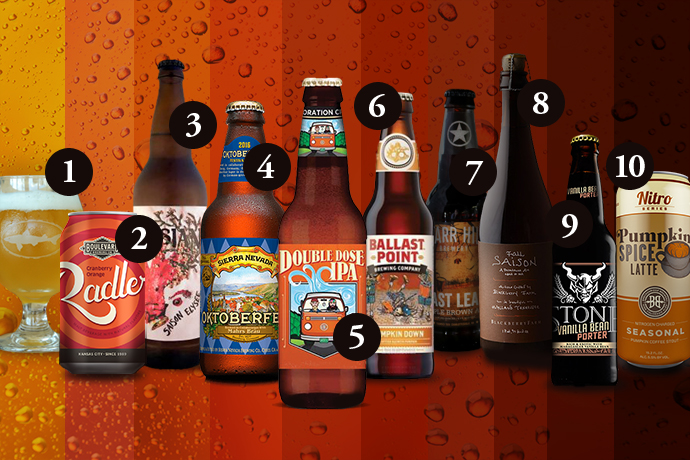 Another fall, another chance to pop open a slew of new seasonal beers. And while such beers usually land somewhere in the range of amber to more amber to most amber, this year we’ve got a full spectrum for your consideration.

We even made you a visual guide to navigating this important field. We’re calling it the Fall Beer Color Spectrum because that’s what it is.

1. Dogfish Head Fall on Me: We’ll start with a Belgian-style farmhouse ale that’s brewed with a bunch of apple cider and mulling spices. Because it’s the lightest in color, and that’s how this works.

3. Elysian Saison Elysee: Munich malts, Czech hops and cumin. That’s either the recipe for a weird chili, or three tenets of this beer.

4. Sierra Nevada Oktoberfest: Each year, these guys partner with a different German brewer to concoct a new Oktoberfest. This year it’s Mahr’s Bräu, and we get a beer with rich malts, spicy hops, pretty colors and other positive attributes.

6. Ballast Point Pumpkin Down: Ballast Point’s regular Piper Down Scottish Ale is reimagined, as here it gets the roasted pumpkin treatment to become what we have before us. Which is a beer loaded with flavors of caramel, toffee and orange gourd.

8. Blackberry Farm Fall Saison: This farmhouse ale is full of roasted malts and earthy spices. They recommend pairing it with game meats, nutty cheese and rye bread. No arguments here.

9. Stone Vanilla Bean Porter: A soft and silky porter that’s sporting plenty of Madagascar vanilla bean, plus notes of chocolate and coffee. Drink it after dinner. Or as your dinner.