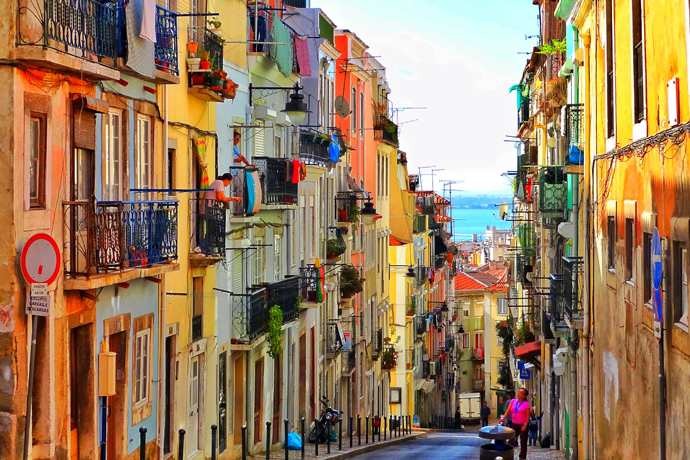 Next up, our man on the ground heads to Lisbon.

General Notes
It is a strange, somewhat jarring experience, catching a stray glimpse of yourself in the mirror after not seeing your reflection for over a week.

Your hair is messier, your skin oilier. That dope new shirt you assumed fit well hangs awry. Everyone has an image of themselves maintained in their mind’s eye, and yours doesn’t quite match up. You look like someone else, simply by virtue of not having seen yourself in some time; the mirror, instead of reflecting you, appears rather to reflect a photograph of you, taken sometime in the future.

And yet, there’s something liberating in this, too, buried beneath several layers of identity-related unease. Without the constancy of your reflection—without an affirmed image of yourself—you are no longer concerned with maintaining that image. Your ego, crafty bastard it is, has nothing firm to latch on to. You are, in some small way, free.

This is how I felt my first week in Lisbon, until the proprietors at the unfinished hotel where I was staying finally installed a mirror in my bedroom/bathroom.

And it seems emblematic of the prototypical Portuguese man, who is, by my admittedly warped account, utterly unself-conscious, wearing slim pants—maybe not jeans, definitely not slacks—a pair of worn-in flip-flops and a T-shirt featuring a colorful front pocket, with sleeves that seem to draw themselves taut around the sort of lean muscle definition achieved not by frequent exercise but through a winning combination of genetic predispositions. (Like the French, the Portuguese seem to consume a diet of extremely rich, fatty foods without suffering any of the consequences.)

This man sports a trimmed beard. He is quick with a smile. He may or may not be agile on the soccer pitch, a casual poet and wholly capable of stealing your girlfriend. The clothes he wears are less a result of careful calculation, more the thrown-together sum of good sartorial instincts and comfort. They are hip, but not “hipster”; close-fitting, but not tight; informal, but not shabby; colorful, but not garish.

He eats when he’s hungry, which is late at night, drinks when he’s thirsty, which is often, and wakes up when he feels like it, which is roughly around 11am. None of these tasks are undertaken with a sense of urgency; his mood, one imagines, drifts along like an inflatable raft on a lazy river, propelled only by the wind and the gentle ebb and flow of the water.

Perhaps it was with this ethos in mind that I purchased a women’s blazer at one vintage store, and an outlandish pair of ’80s-ish swim trunks at another, which I’ve since insisted on wearing as shorts, with everything. In Lisbon, such a nonchalant approach to personal style seemed appropriate.

Even if I ended up looking like a goof.*

Trends
—Freddie Mercury mustaches, along with mustaches in general. Suffice it to say the state of the Portuguese mustache is strong.

—Round, almost Lennon-esque eyeglasses, of the sort worn by Fernando Pessoa, who is one of the greatest poets in the Portuguese language and the man most prominently figured on the cover of a near-ubiquitous anthology of Lisbon poets.

—Sweaters draped over one’s shoulders, in the style of mid-century American country clubs. Perhaps this was more of a tourist thing. Nevertheless...

—Pocket tees of all shapes, sizes and pockets. Long live the pocket tee.

Shouts
The black-bearded bartender named Tito with a large top hat and old-school derby shoes at A Tabacaria, a tiny cocktail joint with no menu and very tasty drinks; barefoot dude with glistening white teeth in a green bandanna and a kaftan, looking like a charlatanic spiritual healer; Indiana Jones–like character riding in a tuk tuk, wearing desert pants and boots and coming into view as if from another time; skateboarding samurai with oversize white button-down, a thin mustache and shiny black hair bound in a small ponytail; all those private university students in long black capes—both in Porto and Lisbon—participating in some sort of fraternal initiation and/or Eyes Wide Shut–style cult.