Building the Perfect Charcuterie Board

An Expert Talks Cured Meats, Bread Strategies and the Wonders of Head Cheese 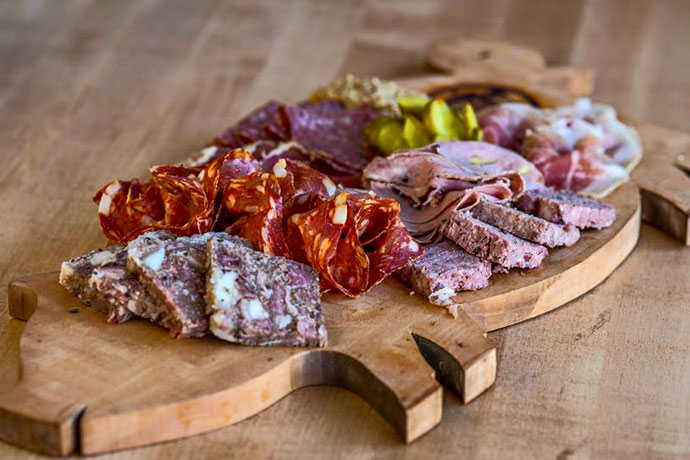 The charcuterie board. It seems so simple.

Just throw a bunch of meat on a board, maybe a little mustard, and call it a day.

Until you find yourself standing in front of a butcher counter, eyes glazing over as you stare at dozens of options and start questioning everything you thought you knew about meat. Questions like: What’s the difference between pepperoni and salami? Cured ham or smoked ham? And what the hell is head cheese, really?

So to answer these pressing questions, and hopefully some others, we enlisted chef Craig Deihl, the charcuterie pro behind Charleston’s Cypress restaurant and Artisan Meat Share, and a man who’s created nearly 100 different types of charcuterie.

He knows his stuff. And he’s happy to share that meaty knowledge with all of us. Knowledge that should come in handy for any weekend afternoon football-related snack needs that may arise now or in the future.

Five is the magic number.
For a well-balanced charcuterie board, Chef Deihl recommends five different types of meat: a mild salami (like Genoa); a dry-cured or lightly smoked ham; a pâté or terrine; a more robust dry-cured meat (like lamb ham or bresaola); and a spicy salami like Calabrese or pepperoni, which, apparently, is a type of salami.

As far as eating order, he says: “I like to start with mild, then move through to the rich stuff, then finish with spicy. The spicy element cures palate fatigue, so if you go back to something rich after eating something with heat, different flavors will pop.” That is some sound advice.

Don’t forget the pickles.
When it comes to mustards, pickles, breads and other accoutrements, yes. Always yes. From the man himself: “Pickles are good. People always want them, especially with items that are super-rich, fatty and luscious. They have that high acid, which breaks up the fat and lets you go back for another bite.”

Now, as for the question of bread versus crackers, it’s hard to go wrong. But you could go a little wrong. So for something hard like salami, you want to pair it with a softer bread, like focaccia. But when you’re dealing with anything spreadable, opt for a thin flatbread or a high-quality cracker. Basically, go with contrasting textures, and you’ll be golden.

Temperature is important.
According to Deihl, you really want the meat at room temperature, and the thicker the slices are, the longer they’ll take to warm up. Makes sense. He says: “With salamis and cured hams, the flavor profiles will totally change for the better within 10 to 15 minutes of removing them from the fridge. Then they can sit on a board for two to three hours, and they’ll be good. But with things like pâté, you want to serve them cold. It’s got gelatin in it, so as it hits room temperature, it’s going to liquefy. That’ll change the flavor for the worse, and it won’t look so pretty on your board.”

Bring cheese.
Pairing cheese with charcuterie is a pretty simple operation, as long as you follow the same template as above. When eating, progress from the soft, milder cheeses to hard and nutty options, and finish with the super-powerful and funky stuff. Deihl notes that while you shouldn’t expect every cheese to match perfectly with every meat, if you include a range of cheese styles, you’ll improve your chances of finding the meat/cheese combination of your dreams.

So, to recap, Craig Deihl knows about your cheese dreams.

Shop local.
Deihl recommends a couple of nationally available brands like La Quercia (Spanish ham) and Creminelli (salami). But for the most part, you’ll find the best stuff at your local artisan butcher shops. Provided you live in the kind of place where local artisan butcher shops exist. This is particularly important when you’re looking for things like pâtés and terrines. “You want a grocer or butcher who makes their own. These items have higher water activity and more perishability, and you’re less likely to find them prepackaged. You want them really fresh.”

Don’t sleep on head cheese.
The man is a big fan of head cheese. “We make ours from whole pigs, and it includes the head, the ears, the front shanks and the hocks. It’s got luscious gelatin and a rich mouthfeel. We always include it on our charcuterie plates, because people might not order it on its own; the name is pretty unappetizing. But it really is one of those items that, with craft and skill, can be one of the most flavorful and delicious on the board.”