And Next Week, Jonah Reider Takes Over One of Chicago’s Most Innovative Restaurants 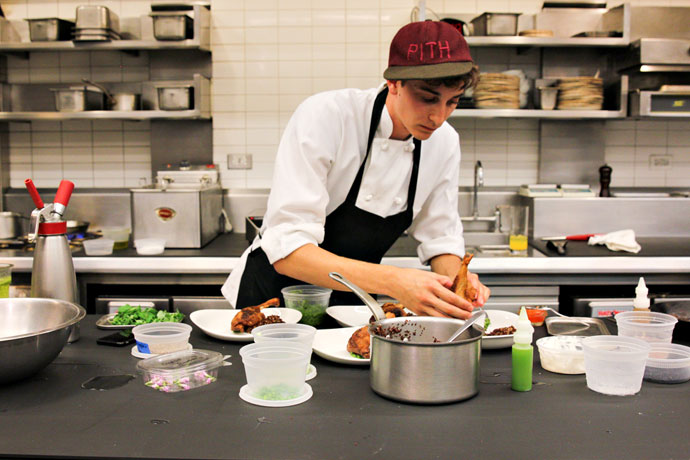 Jonah Reider is a trained jazz pianist whose all-time favorite snack is the rice cake.

When he talks, he casually drops the words “dope” and “dank” into sentences, but only as modifiers to describe complex things like his autumnal celery root soup, and popcorn blanketed in egg yolks he cured in salt and sugar.

One time, not long ago, he crafted a cannabis-champagne gelée, for an event that was covered by High Times magazine. And, for over six months last year, Reider ran a four-seat tasting-menu restaurant called Pith out of his dorm room at Columbia University in New York. So if you already know his name, that probably explains why.

But now, having graduated from college in May, Reider, at the ripe old age of 22, is stepping out of the dorm room and into the kitchen as the guest chef at Intro—a Chicago restaurant that changes its entire concept, menu and chef every few months.

Despite some well-deserved acclaim, this is Reider’s first experience in a professional kitchen. On the brink of his debut next Thursday, we called him up to chat about his old dorm room, the problem with BuzzFeed Tasty videos and the downside of cooking while stoned.

So what was the spark that made you think, “Dorm room restaurant. One of those needs to happen”?
The dorm room restaurant and dorm room chef thing was a trope the media ascribed to it. I never thought of myself as a chef, or opening a restaurant. It was more that I had so much fun and was learning a lot and provided a needed opportunity by cooking these... not even fancy, but refined meals in the most outrageously relaxed environment.

So many restaurants are saying, “Oh, we provide refined cuisine without all the fussiness.” But doing this shit—sitting around your $20 Ikea table in your dorm room—you cannot get less fancy than that. I would be serving the first course on the same plate as the second course, because we only had four plates.

It really became a thing because I was cooking these supper clubs for my friends, and then friends of friends wanted to come, and then my roommate suggested I make an online sign-up sheet. I didn’t anticipate strangers would sign up for it. I thought it would be loose friends or acquaintances—people I knew who wanted to swing by my apartment for this really convivial meal instead of going to a shitty dining hall or expensive restaurant. And it really exploded.

Who are the four people, living or dead, you’d most like to cook dinner for in your old dorm room?
Thelonious Monk, Kanye West, Ernest Hemingway and Alice Waters.

For those of us who aren’t lucky enough to snag a seat at Intro, can you give us an idea of what the vibe will be like?
The best social experiences, in my opinion, involve creating and consuming something together. And food is such a good medium to explore that with. But people always forget, and restaurants forget this sometimes, too, that it’s not enough to serve really nice food. I don’t particularly look forward to going to restaurants where you spend an outrageous amount of money to have these impeccably prepared plates that are presented devoid of a social element. It almost seems that some of these restaurants are trying to make sure nothing bothers you except the food. To me, dining institutions should be embracing the things that might distract you from the food—like music, art, talking with other people and meeting new people. A restaurant doesn’t just need to be a place you show up to because you’re hungry, and order, and leave.

I’m really excited about working with potters to make custom pieces to serve my food off of. And I’m excited to make a playlist. I’m a jazz pianist. That’s what I studied, not cooking. My world is mostly music, so there’s going to be a ton of neo-soul playing.

Will there be any experiential flourishes?
I’m not looking to do anything really contrived, like “Here’s this dish and I’ll light it on fire.” On the weekends, we’ll have these ticketed supper clubs, where it’s just going to be 10 to 12 people in the dining room. I’ve been thinking a lot about how to make it an interesting experience. Part of that might be arriving for your meal and maybe having no chairs be in the space yet. And you’ll have to meander around and say hello to the other people there—and enjoy an amuse-bouche, maybe a welcome cocktail, all while wandering around chatting with other people. And then we’ll sit down and have a meal.

What restaurants are you most excited to try while you’re in Chicago? What’s your favorite restaurant in New York?
I’m really looking forward to checking out Roister and Elizabeth. Wildair is one of my favorite spots in NYC.

Sounds like you use some advanced cooking techniques but have no restaurant or culinary school background. How’d you learn this stuff?
Well, I’m still learning, for sure. But I think I have a predisposition for cooking from having learned jazz piano, and being excited about improvising, in the sense that a great improviser is someone who has very diligently learned technique, what goes well together and what old master creators did, but when it comes time to perform, can create this spontaneous thing that reflects how they’re feeling and who they’re with. I think cooking has that same appeal. I can spend a lot of time and energy sourcing these amazing ingredients, and then combine them into something that’s unprecedented and interesting and stimulating.

But a lot of it was just going to school in New York, and walking all over the city looking at the menus taped up outside fancy restaurants. Like, I was never going to go to these restaurants because they cost too much money. But just reading a fancy menu and playing around with it in my head, imagining how they might’ve made these dishes and all the ways this dish could’ve been plated or constructed, really helped.

Is there any one dish you cook that your friends request more than others?
I honestly don’t know. The last year has melded in my mind. I’ve made so many dishes. I will say that there’s one dish my father made. It’s a very smooth and amazing fall soup of celery root. And I don’t repeat dishes very frequently, but for some reason I made this soup all the time. Partially because it’s nice to make this thing my dad makes. But also because over the billion times I’ve made this soup, it’s changed bit by bit. So I’m definitely going to be serving this soup at Intro. Only now, I’m making it with celery root and parsnip, and I use a little bit of hops to bitter the soup and give it this really unusual, subtle but intense flavor, before garnishing it with little dots of maple syrup and crispy twirls of parsnip.

Sounds dope.
It’s fucking dope. It changes so much, but it’s also exactly what I made a year ago. And it’s simple. It’s nice to serve something like that.

What’s your number one piece of advice to college students who don’t know the first thing about cooking and are eating on a budget?
The first would be to invest a little bit of money into staples of the kitchen. Once I’d stocked a kitchen ever so slightly—like, with 100 bucks or something—it made it so easy to go to the market and spend a few dollars getting the one thing I wanted that I was excited about cooking. It made cooking a lot cheaper and more palatable.

I can only speak for it in my generation, but everyone’s watching all this TV content that’s really fancy—like Chef’s Table and three-star Michelin narrative sagas. But then the actual foods they’re learning how to make are from those idiotic BuzzFeed Tasty videos, where they really dumb down cooking. It makes me feel like if I want to make one of those dishes, I need to have all this stuff. I think my biggest tip would be to understand that cooking is much more method-based than recipe-based.

You’ve made a fair amount of cannabis-infused comestibles. Do you ever cook stoned?
I would never go into a kitchen for an event or work like that. By myself, sure. In the same way as a musician or an artist, some of these substances can be really conducive for creativity. I don’t think they’re conducive to execution.

Is there any typical “college student” snack that you think has some culinary potential?
Yeah, popcorn. Popcorn is dope. I’ve served popcorn at tons of my events with tons of toppings. I think it’s a great snack.

Can you give us some specifics?
I like curing egg yolks in salt and sugar and then grating them over popcorn. That’s been fucking dank. We also made a powder out of harissa and put that on popcorn once.

That’s some next-level popcorn.
No doubt.

What are your favorite late-night snacks?
One of my all-time favorite snacks is the rice cake. Which tastes like literally nothing. It’s just pure texture in your mouth. And I can eat them for hours. The rice cake is the most genius, transcendent food item. It’s so lacking everything, and yet so stimulating to eat. I always tell people, “These are my two favorite things: cold New York City tap water and rice cakes.”