And This Master Chocolatier Has Much to Teach You 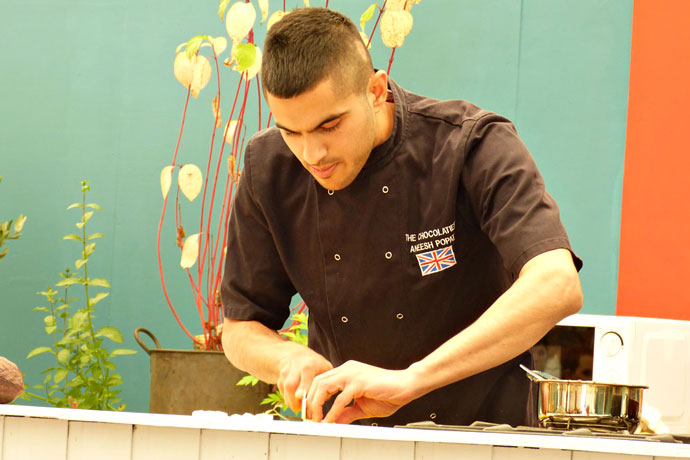 The other day, I met a real live chocolatier.

His name is Aneesh Popat. He’s really just a guy like me or you or British-you, except his life revolves around crafting inventive confections for Michelin-starred Londoners and royal people with very specific tastes. Also, he’s staunchly opposed to Hershey’s. And may or may not eat the equivalent of two chocolate bars or more each day (he may).

I tried a chocolate from Madagascar that was made of 100% cocoa, and had an earthy, almost savory flavor. I tried another made from beans grown on trees in Bolivia one could only find by following naked tribesmen. I tried another still—one of Aneesh’s signature truffles—that contains chili released approximately seven seconds after you bite into it. I tried others, too, but it seems rude to keep listing them here.

Later, Aneesh tempered some chocolate (made it the very specific temperature/consistency necessary to work with), using a microwave, a plastic bowl, a wooden spoon and his bottom lip as a thermometer. Based on, well, not much, I’m fairly certain that’s the chocolatiering equivalent of Tin Cup qualifying for the U.S. Open using only a seven iron and swag.

After the demo, I sat down with Aneesh to talk about making chocolate at home, building perfect s’mores, catering to royalty and something called water ganache...

When you think of chocolate, what’s the first thing you associate it with?
Love. Chocolate is linked to all our emotional collaborations or disappointments. If you’re sorry, if you’re happy, if you’re proposing, if something bad has happened and you’re cheering someone up—it all has to do with emotions. On a scientific level, too, chocolate actually does make us feel love. It raises the serotonin levels in our brain for four times longer than a kiss.

Someone decides to become a chocolatier. What’s their first move?
People always ask me that. There’s no way to start except buying a bar of chocolate, melting it and making something.

Your company is particularly well-known for your “water ganaches.” How’d those come about?
We’re probably the only chocolatier known for making chocolate, at least exclusively. As a brand, none of our products contain any cream or butter. There are two reasons. One is that it’s a healthier alternative. The other is that when you use water, you’re really opening up the flavor of chocolate.

Why do other chocolatiers not like working with water?
People don’t use water because no one realized you could do it. When you’re taught to make a ganache, you’re supposed to use cream. Not even butter. If you go to France today and you talk about water ganache, they don’t even want to know about it because a ganache is supposed to have cream. That’s how it is. They’re religious about their recipes.

So for most people it’s taboo. A lot of people think it won’t work. It took a French chemist to realize that if you could mix fat with water to make a mayonnaise, you could do the same with cocoa butter and water. And it sets as creamy as mayonnaise, as creamy as a cream.

What separates a good chocolatier from a great chocolatier?
Quality of the ingredients and the way in which you use them. You must respect your chocolate, its ethics and its character. We source chocolate that’s more than fairly traded, and tastes amazing. If they’re going to take so much care in harvesting it and processing it for longer than mass produced chocolate to make sure the flavor profiles are right, I’m not just going to come in here and chuck cream and butter in it.

You mention you catered to royalty—what did they order?
The crown prince of Abu Dahbi wanted the lowest calorie chocolate bar in the world. So we made a bar of chocolate, emptied the middle out and filled it with chocolate ganache, but made it in a way that reduced its calories by about 35% [compared to a standard chocolate bar].

The maharaja of Jodhpur in Rajasthan, India commissioned a fragrance alongside the chocolate that was reminiscent of the monsoon-drenched red sand deserts of Rajasthan. So we got a flavor profile of the fragrance, and ended up coming up with something very floral, very delicate. We still have it.

Where in the world might people be surprised to find really good chocolate?
Tokyo. Their skills are amazing.

Why do you think people are so averse to making chocolates at home?
People are scared because they think it’s not going to work. If it doesn’t, just pour milk or cream over it and make drinking chocolate out of it. Give it a go. What’s the worst that can happen?

What’s the strangest type of chocolate you’ve ever made?
Baked beans with white chocolate. It freaks people out.

How much chocolate do you eat on an average day?
About 100 grams. But it could get up to half a kilo if it’s near the holidays. [Ed. note: Your standard Hershey’s chocolate bar weighs 43 grams, so... this man eats a lot of chocolate.]

Do you have a guilty pleasure chocolate? Like, if you were at a convenience store and forced to buy chocolate, what would you buy?
I can’t do it. I would be revolted. I’m a little bit of a snob. One thing we love the Americans for is the word “candy”—and I think all these mass produced chocolates are candies. I do like Daim Bars. They’re Swiss.

You’re on your death bed, and you can only eat one more piece of chocolate. What would it be?
I think it would be the 100% Madagascar chocolate. It’s the purest.

Noted. And lastly, America celebrates Labor Day soon. Feels like a s’mores occasion. Got any pro tips for making great ones?
For me, the ultimate secret to making the best s’mores comes in threes. Sea salt, peanut butter and seriously quality bittersweet chocolate. Add a generous layer of peanut butter to each cracker and season it with sea salt. And then another secret: grate the bittersweet chocolate over the peanut butter so that when the hot, smoking marshmallow hits the chocolate, it melts all the way through.