Meet Timpano, a Lust-Worthy Italian Dish the Size of a Drum

Just Like Grandma Makes It, Assuming Your Grandma’s from Sicily 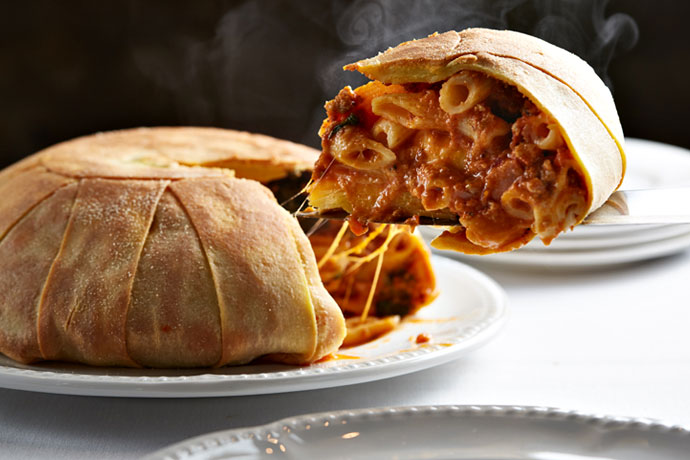 They call it Timpano, and it’s a baked pasta dish that hails from Sicily. Although the version you’re currently ogling hails from Chicago’s Nonnina, which is slightly closer. If you’d like to try it for yourself, great. Bring some friends.

Timpano’s literal translation is “drum,” which comes from the shape this dish takes after being baked in a large bowl, rather than any percussive capabilities. And inside that glorious dome of dough is a medley of sausage, meatballs, mortadella, macaroni, mozzarella, tomato, spinach, braised pork, salami and eggs. It’s not a light lunch.

“We wanted to focus on dishes we ate growing up and things that were prepared by our grandmothers. It was very important for the Timpano to be on our menu since it was something that reminds us of Sunday dinners.”

Clearly this guy’s Sundays were better than most.

To actually make the thing, he lines a bowl with sheets of fresh pasta, and then fills it with smaller cut pasta similar to penne or garganelli. There are lots of options for the filling, so don’t be shy. But at Nonnina, they fuse all of those ingredients listed above with marinara sauce and béchamel. It’s then baked, shimmied out of its stainless steel container and served.

This thing’s meant to feed a crowd, which makes sense. It’s huge. So the next time you’re hosting some Italian diplomats for dinner, break one out. They will be impressed. They will want seconds. You will want seconds. Everyone will enjoy a good laugh when you pretend to drum on the top with a spatula.

On second thought, watching football with friends could also work.