The One Thing You Must Eat in South Africa

It’s Called Biltong, and We Know a Guy 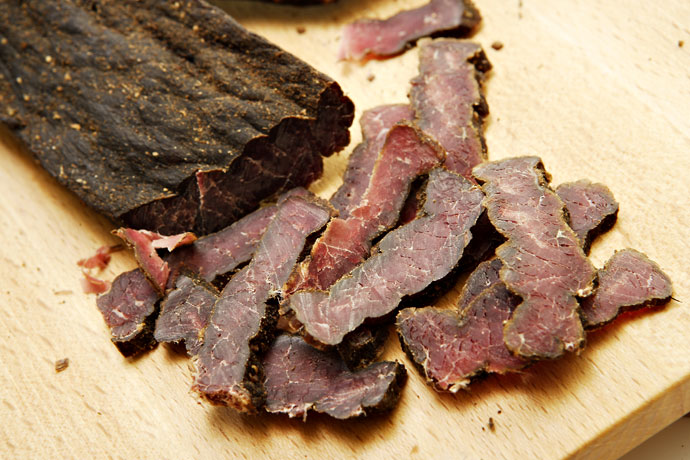 I have a biltong guy now.

And man, do I feel relieved about it. It’s a strange sense of relief, though. Mainly because I never knew I needed a biltong guy until my recent trip to Cape Town.

See, when you’re in South Africa, you want to keep your biltong stash flush. Even though I’m back home now in Chicago... well, let’s just say it’s good to know I’ve got a hookup waiting for me if I return.

I’ll even give you his name in case you ever go to Cape Town (and you should). Because I’m not the kind of guy who gets stingy with his biltong connections.

It occurs to me that there’s a small chance you don’t know what biltong is.

It’s okay. There’s no shame in it. I was like you once. But that was nearly a week ago.

Biltong is just one of the unusual food words I encountered while in Africa. (The others include braai, chakalaka and boerewors; I’ll save those stories for another day.)

It mainly comes in beef flavor. But ostrich is popular. And so are exotic-to-us meats like kudu, springbok and eland. You haven’t lived until you’ve eaten some kudu biltong.

Although... after watching those majestic, antelope-like beasts gracefully roam the veld, it felt a little weird that, a few days later, they were a snack. Oh well. Better us than a lion, I suppose.

But biltong—and really, this is the thing about biltong—is like American barbecue. People are competitive about it. Those who make it guard their recipes and their spice mixes with their lives. There’s a real sense of pride when it comes to biltong.

So, about my biltong guy. His name is Kobus Groenewald, and he’s a gentle-mannered fellow with a brown apron and clear plastic cafeteria-worker-style gloves. He runs the Stokkiesdraai Biltong stall Saturday mornings at the Old Biscuit Mill, a stylish artisan shopping center in the Woodstock neighborhood of Cape Town. There you’ll find a weekly neighborhood food and farmers’ market.

His company was started by a biltong connoisseur who dropped out of the rat race eight years ago to pursue handcrafted, small-batch cured meats made from grass-fed animals.

So that Saturday morning, I sampled from an array of enamel bowls heaped with delicate curls of the meat. Beef, I nibbled. Kudu, I felt bad, but I nibbled. And all the while, we talked biltong. I munched a few more slices. I was happy. I knew that if I wanted biltong, this was the place to get it, and that Kobus was my man. It’s amazing how quickly you can develop a bond over biltong.

Here’s the catch, though. Stokkiesdraai doesn’t ship its goodies to the states. It’s a little sketchy as to whether you can bring their biltong back with you—one of my American travel mates had his stash confiscated at the Denver International Airport. I mean, Denver, of all places. If you’re not safe there...

So now that I’m back stateside, I’ve been looking around online, and yes, there are some US-based biltong enthusiasts who sell it here. Places like North Carolina’s Biltong USA. Maybe I’ll give them a try. But Biltong USA sounds all wrong. Like New York Pizza South Africa. So I’ll abstain for now. Instead, I will return to Cape Town one day, safe in the knowledge that good old Kobus waits for me with bowls of biltong at the ready.

Until then, maybe a nice salad.