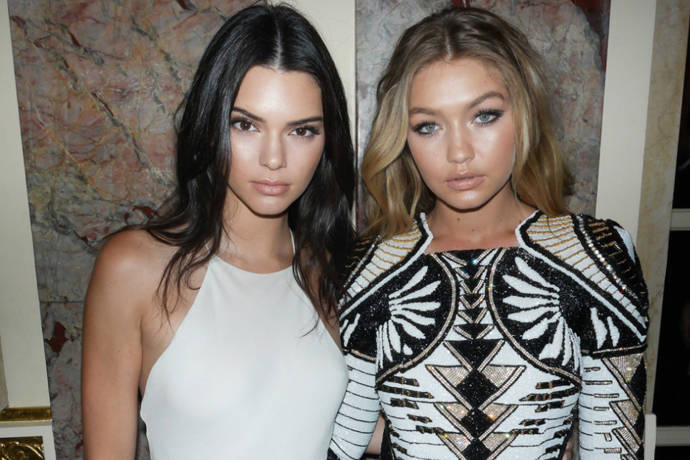 Over the past few months, there’s been some doubt raised by Hall of Fame members of the supermodel world as to whether today’s models (namely, Kendall Jenner and Gigi Hadid) qualify as supermodels. Rebecca Romijn, most bluntly, said they are “not true supermodels.” Stephanie Seymour said in a Vogue interview that the models of today needed a new title, and graciously suggested “bitches of the moment.” Naomi Campbell complained about them not having needed to climb enough stepping stones.

The criticism may be getting to the youngins. Apparently Hailey Baldwin has been shamed into believing she’s not a supermodel. Though she’s actually comparing herself to Jenner and Hadid.

But just for now, let’s put aside the fact that this is the least important and one of the most absurd arguments of our time, and dive in a bit.

The premise here is that contemporary models’ fame, magazine covers and jobs have come from the fact that they’re social media sensations and, ipso facto, their success has nothing to do with any kind of essential supermodelness.

The implication being, while these forerunning models worked their way out of the mean streets of places like Berkeley (Romijn) and San Diego (Seymour) with nothing but a few dollars in their pocket, ridiculously superior genetics and a dream, today’s breed simply opened up an Instagram account and coasted in on reality show celebrity.

It’s unclear why the combination of social media prominence and stunning beauty and the ability to walk and gaze fiercely is any less valid a path to Supermodeldom than the pre-social days when models had to fight their way to the top with only the latter two. What is clear is that creative directors from Balenciaga, Marc Jacobs, Balmain, etc., seem not to care.

Seemingly lost in the back and forth is the impossibility of objectivity. It’s not as though there’s an official recognition body for the profession. No one has ever been a “licensed” supermodel. The concept itself is in the eye of the beholder. So if the design world, the general population and Vogue want to anoint Kendall Jenner and Gigi Hadid supermodels on the basis of their 60.8 million and 20 million Instagram followers respectively, in addition to their dozens of runway appearances, maybe the OGs should stop yelling at everyone to get off their lawn.