Pickle Brine. In a Can. For Cocktails. 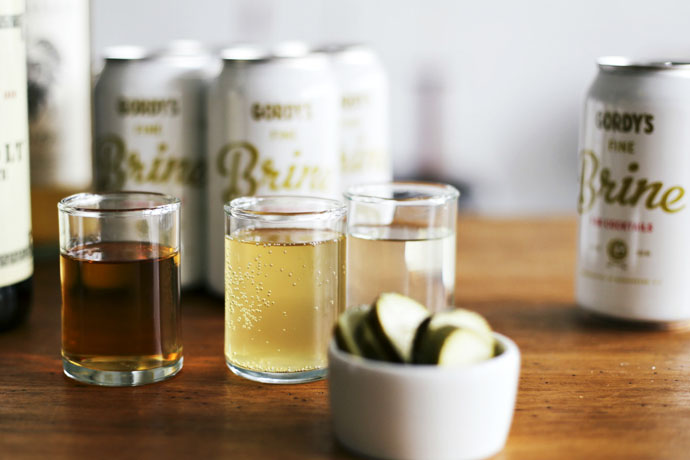 Consider the humble pickleback. The unlikely friendship of whiskey and pickle brine. The unexpected synergy. The ease with which you can make one at home.

Until you realize that doing so requires the purchase of a whole jar of pickles. What if you’re not hungry? What if you just want the brine, without the burden of extraneous cucumber spears?

These are big questions.

Obviously someone had to taste the stuff, so the brave souls at UrbanDaddy HQ volunteered to do so. We sampled Fine Brine in three different contexts: on its own, as a chaser for Irish whiskey and as an ingredient in the gin-based cocktail recipe (basically a pickle-accented gimlet) that’s printed on the can. These are our findings.

“Tastes like pickle juice. So the core concept is strong.”

“It’s like when you lick your lips after swimming in the ocean. And you’re simultaneously eating pickles.”

“That is some top-notch pickle juice.”

“I can feel the electrolytes coursing through my system. Might bring this on my next bike ride.”

“Step 1: Procure a jar of pickles. Step 2: Eat the pickles. Step 3: Retain the juice left behind from the previously eaten pickles. Step 4: Scratch head as you ponder both the meaning of life and why canned pickle juice is suddenly a part of yours.”

“Pickle juice in a can is a weird concept, but when you shoot it after the whiskey, it’s less weird because it’s surprisingly delicious.”

“The juice itself is great, but the can gives it a bit of a metallic taste. Paired with whiskey it’s less noticeable, so pair it with whiskey.”

“I enjoy pickles and pickle juice. And I enjoy whiskey. This is my first time having them together as a collaboration, and I like it. But I’ll have to try the whiskey again for quality assurance.”

“The brine seems a bit lighter and milder in flavor than a typical pickle brine, which makes it a nice match for the whiskey. It’s salty, so I wouldn’t want to drink it on its own, but it brings out the flavor of the whiskey in a really appealing way. I’m a fan.”

“I can’t say this is an upgrade over the standard gimlet.”

“Not bad. The savory quality is interesting, but I’ll stick to the picklebacks.”

“I think its full potential may be better realized in a Bloody Mary.”