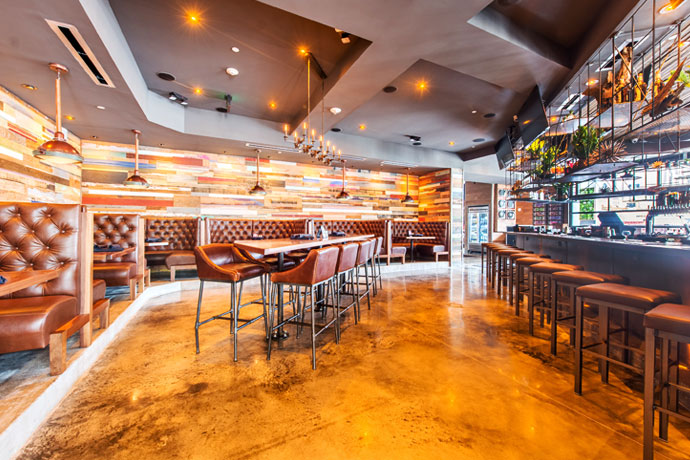 12 Photos Tap 42 Coral Gables
Sometimes you simply don’t have any say in a matter.

You’ve got the much-closer-to-home-than-Fort-Lauderdale Tap 42 Coral Gables to thank for that. It’s a patio-equipped watering hole with lots of beer and lots of beer-friendly food, it’s open now, and it looks exactly like this.

Or let’s say you find yourself in the Gables after a long, beer-free day. That’s clearly a situation that needs an immediate remedy. So you head over to this industrial-looking affair with wood paneling, massive garage doors that roll up to an outdoor patio and a big circular bar with 42 beer taps behind it. Plus a few cocktails on tap for good measure.

Now, you’re probably going to need some bacon-and-sweet-corn guacamole and a lamb burger with whipped goat cheese. Or anything from this menu, really. It’s the kind of stuff that serves as nice, fluffy cushion for pints of J. Wakefield’s Hop for Teacher or a special collaboration brew with Funky Buddha called 42 Truths. (Speaking of, here’s the beer list.)

As for the entertainment, there’s a wooden DJ booth with turntables fastened to the wall behind it. That’s mostly used during brunch and the occasional late-night session.