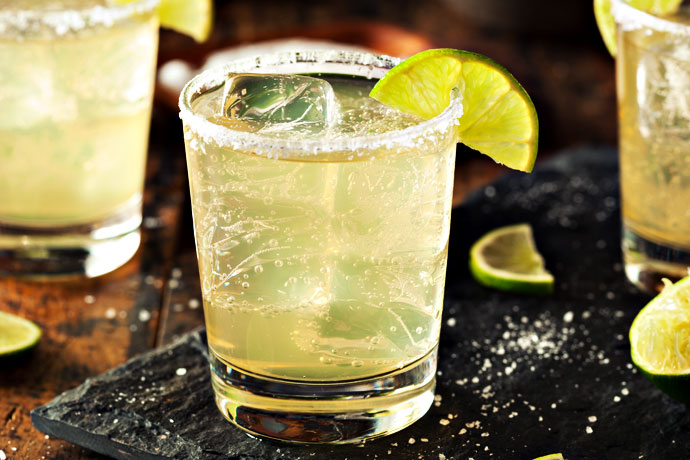 Today, we’re celebrating Cinco de Mayo the best way we know how: by pitting two impassioned writers against each other in all-out verbal warfare to determine, once and for all, which version of the exalted margarita is better suited for your holiday fiesta.

In on-the-rocks’ corner, we have Sam Eichner. Defending the frozen version is Taylor Tobin.

And in the words of the great Jimmy Buffett...

Sam Eichner: Let me first say sincerely, well, mostly, that I commend you for your courage. It’s not easy to walk into this virtual arena, on Cinco de Mayo, no less, with a mariachi band and a bowl of fresh guacamole (accurate depiction?) and argue against its most celebrated libation: the margarita.

Taylor Tobin: So accurate. Except that I’m not arguing against the margarita. I’m not a savage. I’m arguing for the frozen version. Frozen margaritas are people, too.

But should you emerge from this debate victorious, I’ll share my guacamole recipe with you. It’s pretty easy to make, and it’s delicious. But now that we’ve gotten courtesies out of the way, I’m going to destroy you. Or just tell you why frozen margaritas are superior to not-frozen margaritas.

SE: Bring it. Because, you see, the frozen margarita is not even a real margarita. It’s a more digestible American facsimile of traditional Mexican fare, and it’s often watered down to the point where you can’t even taste the booze. Let me repeat that: Can’t even. Taste. The booze.

TT: Whoa. Blasphemy. Not a real margarita? What does that even mean? The word “margarita” is right there in the name. Besides, they’re supposed to be fun. And what’s more fun than a tequila-spiked citrus Slurpee?

SE: But you know what’s not fun? Attempting to drink your frozen margarita, only to have the entire slushy mess cascade toward your face, wet the tip of your nose and miss your mouth completely. Or maybe even worse, straining desperately through a straw to get even the littlest amount of liquid out from the ice. The whole elaborate song and dance is tiresome. And messy. And I’m afraid some of it’s going to end up on my shirt.

TT: Yeah, drinking a frozen margarita out of a classic margarita glass without getting some on your face can be a challenge. Personally, I prefer more straw-friendly vessels like a rocks glass or mason jar, and I don’t have issues with the straw. But, hey, relax, embrace the messiness. No one’s here to judge you. Which brings me to the greatest appeal of the frozen margarita: it exists in a no-judgment zone. It puts on no airs. It’s the ultimate drink of the people. Simple, potent and synonymous with “a good fucking time.” Don’t you enjoy good times?

SE: Sure, frozen margaritas are the drink of the people, if you consider “people” to be “those who happen to have access to whatever cool machine it is that churns out Slurpees and slushies.” Because, really, who makes a batch of frozen margaritas at home over a batch of traditional margaritas, which are physically incapable of melting in the sun? Not the few people I know, that’s who.

TT: Dude, use a blender.

SE: That’s even worse. Then the ice doesn’t incorporate well enough. And okay, yes, a frozen margarita doesn’t put on airs. If you’re drinking one, you are probably having a good time. But a frozen margarita is like punch—it’s just one mistake away from being regrettable. One miscue on the margarita mix (by the way, margarita mix? Come on. This isn’t the ’80s. Fresh limes taste better and prevent scurvy), plus a few cartoonishly large glasses, and you’re dangerously close to the whole thing derailing into a frat party.

TT: Why let yourself become concerned with what other people think of your summertime beverage choice? There’s no room for self-consciousness in Frozen Margarita Land. There’s only room for warm beach breezes, swaying hammocks, pool floats with built-in cup holders and the dulcet tones of Jimmy Buffett.

SE: Your description of Frozen Margarita Land sounds a lot like Margaritaville, which is better off being quarantined on someone’s uncle’s boat. So to you I say this: enjoy your frozen margaritas. Whenever you’re willing to come to your senses, I’ll be waiting with all the necessities required to make the good stuff, plus a salt-rimmed glass with your name on it. Figuratively speaking. God knows I’m not going to actually write on these glasses. I got them as a gift.

TT: Thanks. I think. But you see, Margaritaville is a place for us all. It’s a place where liquid-margarita enthusiasts and their way-more-fun frozen-margarita-loving contemporaries can coexist, united by a love of lime, salt, tequila and ice, regardless of the form it takes. And this common pursuit should make us friends. Or at least drinking buddies. So let’s pick up the gauntlet, break out the beach chairs and enjoy our margaritas of choice.

Hell, in the name of margarita-fueled peace and sportsmanship, I’ll even give you my guacamole recipe. It’s four ripe avocados, half a white onion, two cloves of garlic, one chopped habanero, half a chopped jalapeño, the juice of one lime, a handful of cilantro, some sea salt and black pepper. Mash that stuff up with a fork, and you’re good to go. You’re welcome.

SE: Okay, I’m throwing in the towel. And by towel, I mean napkin. To use with that delicious-sounding guac. I’m still never drinking a frozen margarita.