Talking Barbecue with an Iron Chef 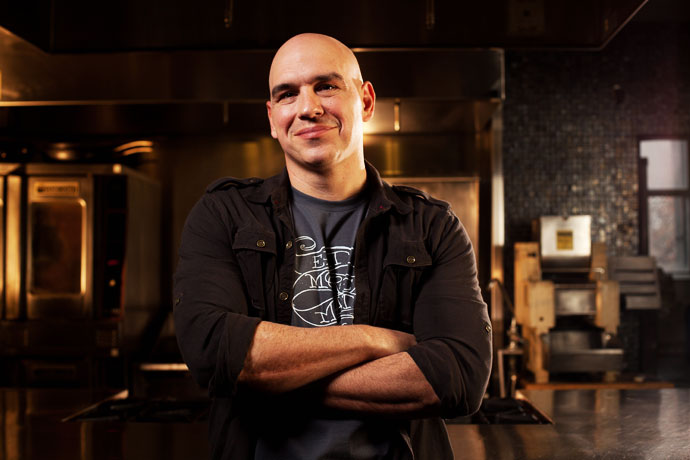 The affable chef is a regular on the Food Network, a culinary powerhouse in his hometown of Cleveland and a staunch believer in pork.

And his latest venture, the just-opened Mabel’s BBQ, is a rustic smokehouse named for Symon’s beloved bullmastiff where you’ll find delicious meats, two-handed sandwiches, crispy pig tails, good drinks and a barbecue style that’s all its own.

So for more, we enlisted the man himself to answer all the hard-hitting questions about Cleveland-style barbecue, Iron Chef America and comfort foods.

Plus one about RGIII.

So, why barbecue?
It’s something Liz [Symon’s wife] and I have been talking about for 10 years and have been working on for the past three. Barbecue has always been a huge hobby and pastime of mine. It always intrigued me, and I’ve been lucky enough to work with some of the best pitmasters in the country.

You’re calling the food at Mabel’s “Cleveland-style barbecue.” What does that mean, exactly?
We’re inspired more by Eastern Europe than the South in our flavor profile. Cleveland is a big Eastern European melting pot, so I wanted to offer a menu that reflected the cuisine. For instance, instead of hot links, we serve kielbasa. Our spice blends, our sides... they’re very reminiscent of what you’d find in Cleveland, like smoked beets with horseradish, sauerkraut and Cleveland brown mustard. We’re also smoking with apple and cherry woods, which are native to the region.

Should we get that extra order of ribs or save room for dessert?
I’m a savory guy, so I’ll always go for the ribs, but our desserts are great. We have three different puddings: banana, key lime and chocolate with toffee popcorn.

And to drink?
We have over 100 bourbon whiskeys, 100 different beers, a really cool Sazerac snow cone and bottle-aged cocktails that we actually steep with tea bags filled with wood chips.

When barbecuing at home, what type of wood is best for smoking meat?
I like fruit woods, like cherry and apple. They produce that kiss of smoke that balances well with the flavor of the meat.

What’s the most common mistake people make when trying to do it themselves?
To me, barbecue is all about live fire and slow cooking, so when people put sauce on something and throw it on their grill, it isn’t barbecue. That’s not to say it’s bad, but barbecue is a technique, not a condiment.

How has the Cleveland dining scene changed since opening your first restaurant, Lola, nearly two decades ago?
Twenty years ago there were probably four chef-driven restaurants in the city, and now there are hundreds; the scene has changed dramatically.

How would you respond to people who say Cleveland doesn’t have an exciting food scene?
I would say, come here and eat! If that’s what they say, then they’ve never really been to Cleveland.

Are there any cuisines unique to Cleveland? Or Ohio?
Eastern European cuisines—Polish, Slovenian, German—those are what really drive Cleveland from a food perspective.

What’s your go-to comfort food?
That’s such a hard question. I’d have to say my mom’s lasagna.

Be honest: is Cincinnati chili all that it’s cracked up to be?
No [laughs]. It’s fine on its own, just don’t put it on spaghetti.

You’ve had a successful run on Food Network, both hosting and competing on shows like Iron Chef America. Who’s the fiercest of all Iron Chefs (besides yourself, of course)?
It’s too close to call, but the one I’ve competed against the most is Morimoto.

We know you’re a big sports guy. So, RGIII to the Browns... good move?
I love it.

Is there anything in this world better than pork?
Um... no.