A Well-Pedigreed Cocktail Bar That Glows in the Dark 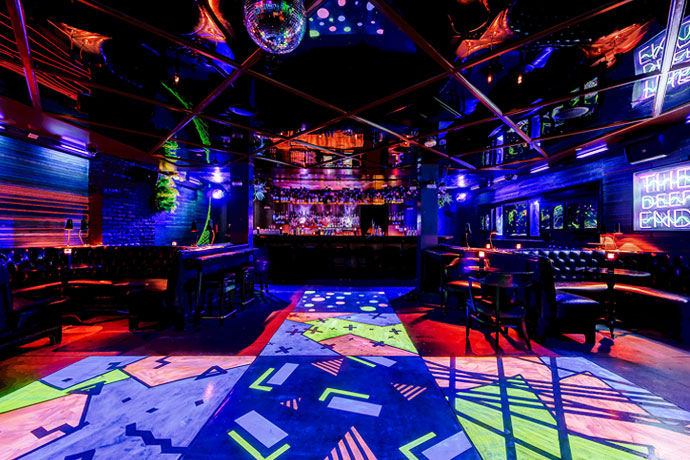 A day for rest.

For going to glow-in-the-dark nautical outer space bars beneath Downtown for butter-washed cocktails.

Wade into the Deep End, a trippy new place for dancing and drinking under black light, now open Sundays, Tuesdays and Wednesdays. You may now peruse its Downtown space and its menu.

Descend into Honeycut, walk straight through the door in front of you and enter a glow-in-the-dark bar resembling Tron’s light cycle race, only with more disco balls and neon fish.

Approach the black marble bar to investigate the tome of cocktails from the 213 Hospitality/​Proprietors LLC alliance responsible for Normandie Club and Walker Inn. And weird photos of lickable toads and astronaut sloths. Can’t forget those.

Order something different, like the Proper Motion (ghee-washed cognac and Armagnac with pineapple, banana, lime, vanilla and coffee liqueur). Then flip through their Deep Cuts magazine for illustrated bios of their colleagues and a few off-menu drinks as you hang out in a leather booth.

At this point, a becoming stranger with oddly iridescent eyes and teeth might pull you onto the floor. Maybe you’ll dance to vibey DJs. Or maybe to their favorite alien-mask-wearing band with an electric xylophone.