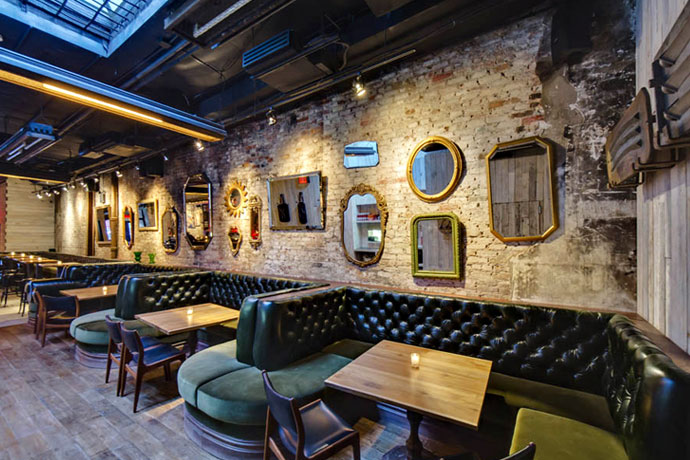 15 Photos Falcon Laundry
Of all the things a steel fabrication mill can become, this is at least top 10.

It’s Falcon Laundry, two floors of strong cocktails and the provisions that go so well with them, now open, and with a rooftop, in Williamsburg.

You’ve got ample tufted-banquette space here (as seen in the pictorial). So take some friends. Take enough to have the kinds of conversations that last a long time and involve a lot of laughing that would be kind of obnoxious if it were coming from another table. Make no plans beyond being here, having some strong drinks and ordering burgers and rock shrimp as needed.

Also consider brunching. It’ll begin with avocado toast and end much later, after looking at your phone, than you thought it was. Thanks, basil lemonade with vodka. (That goes by the name of... Basil Lemonade here. Sneaky.)

Expect it to be a scene during the weekends once Smorgasburg starts back up again. It’s right along the migratory trail that leads there.

Ah, but the roof. We almost forgot. There’s an indoor area with its own bar and cartoon characters dancing and wearing suits on the wall (classic). That’s where you’ll be for now. But just outside that, there’s a deck with lattice and plants and tables and the promise of warm days to come.

You never think you’ll reach the age where lattice is exciting, but here we are.