Making the Case for Meat Pies 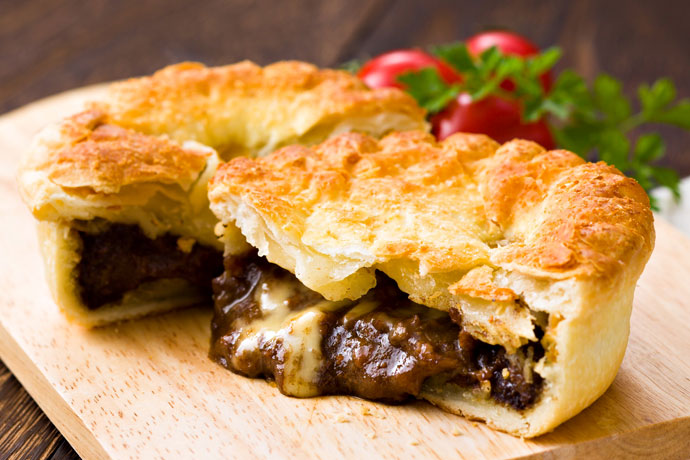 The state of our union is not strong. No, it has nothing to do with what Obama said the other night. Or anything Donald Trump has been saying for the last six months.

It has to do with a shameful and, frankly, un-American lack of domestic meat pie accessibility.

Sure, you can wander into any “It’s the Brooklyn of X” neighborhood in America and find some flaky, buttery Aussie-style pies. But it’s nothing like New Zealand, where I spent the holidays visiting my girlfriend. In New Zealand (and I assume Australia, though I never made it farther than the Sydney airport), meat pies are absolutely everywhere. Quality of life is high.

They’re in bakeries—the hipster kind and the old-person kind. They’re under glass in 24-hour convenience stores. They’re appetizers in fancy restaurants. They’re part of a value meal at McDonald’s. One could walk four feet in any direction and find a new meat pie vendor.

But the place I kept going back to was a tiny bakery in Wanaka called the Doughbin. They had about a dozen varieties at any time, priced for $3 US apiece. There was the classic mince—a kind of “mystery meat” whose vague origins are completely forgiven on account of its hot, meaty, cheesy deliciousness. There was a Thai chicken with green curry; Greek-style spinach; Indian butter chicken. They also had bite-size mince pies called “savories” for those times when you weren’t hungry but just wanted the sweet taste of meat pie back in your mouth.

I enjoyed a few pie-centric breakfasts there before going on long hikes. But where the Doughbin really shined was its 24-hour takeaway window. At a certain time of night, the bakery closed up, but a window facing a side street was always open. Drunks gathered round like moths to a flame. That’s how I came to consume one savory, two spinach pies and half of a mince pie standing on a street corner at 3am after having more than a couple drinks.

So, I say to America: how is this not a thing here? It’s cheap. It’s greasy. It’s a carbohydrate filled with meat and cheese. Its ingredients and production methods are somewhat suspect. And it’s best enjoyed in a pleasant state of intoxication. It’s everything we hold dear.

Food & Drink
How to Saber Champagne Like a Pro
Enlist These Tips From St. Regis Hotels & Resorts, Where Sabering Is a Nightly Ritual