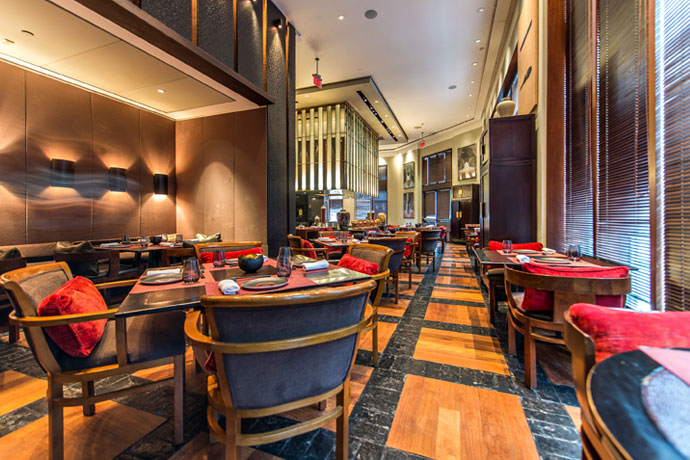 8 Photos Jaya
Hey, we had one day of “winter.” That was nice.

And speaking of nothing that has anything to do with that, here’s Jaya—a stately new Asian spot in the old Restaurant at the Setai space from a Chopped champion. It’s now open in South Beach, here’s the slideshow, and here’s the menu.

Just like before, you’ll want to bring a big group in for some type of occasion. A special one, perhaps. Or maybe you’ve got a date who’s asked that you reserve a table next to the open kitchen so the two of you can watch an army of chefs making some Thai, Indian and Japanese magic happen. That date would be so specifically satisfied here.

Your first order of business should involve a bottle of sake or a round of Chili Passion martinis made with chili-infused vodka, passion fruit and ginger.

Your next orders of business should involve handmade garlic naan, scallop-stuffed dumplings with black truffle and a plate of tandoori-baked chicken. See, the chef here did time at Yoshi by Joël Robuchon. Won Chopped. Generally knows his way around a kitchen.

Which probably makes now a good time to mention the bourbon-brown-butter ice cream that’s served smoking thanks to some liquid nitro.

Any other time would probably work, too.