This Scotch-and-Egg Drink Welcomes You to Winter 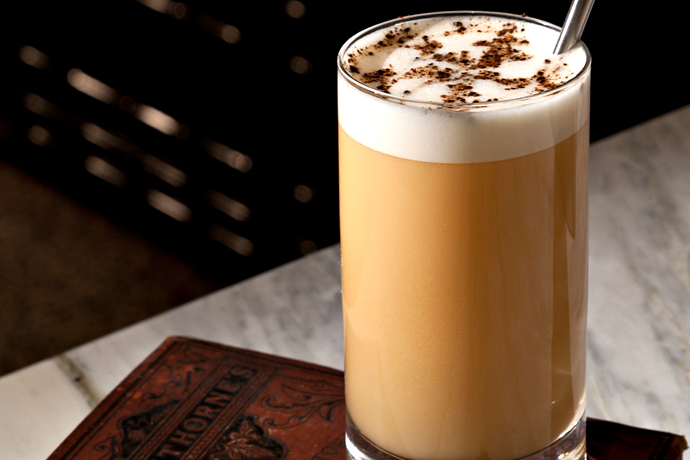 If there’s one thing winter’s good for, it’s snowball fights.

But if there are two things winter’s good for, it’s snowball fights and scotch cocktails with whole eggs inside of them.

For a drink addressing the latter, look to the Monkey Business, a cocktail developed by legendary bartender Jackson Cannon at the Hawthorne in Boston.

It’s composed of Monkey Shoulder blended scotch, Amaro Nonino (a grappa-based digestif chock-full of herbs and spices), vanilla gomme syrup and an entire egg. It’s creamy and frothy with a vanilla hit up front, followed by the flavors of scotch and Nonino in the back.

In short, it’s precisely what you want to be drinking in front of a crackling fireplace while wearing an oversize cardigan. But first you’ll need the recipe:

Mix first three ingredients in pot and simmer for 10 minutes on induction burner. Remove from heat and transfer to new container. Cover container and allow to steep for one hour. Strain into blender with 1/8 teaspoon xanthan gum. Place mix in new container and refrigerate. Makes 2 quarts.

Food & Drink
This Fried Chicken Is Actually Ice Cream
Get a Bucket Delivered to Your Home, and Freak Out Accordingly

Food & Drink
One Hot Wings Recipe to Rule Them All
March Madness Is Almost Here. Prepare Yourself with Anchor Bar's Famous Wings.