The Odd and Unexpected Dishes of UD Thanksgivings 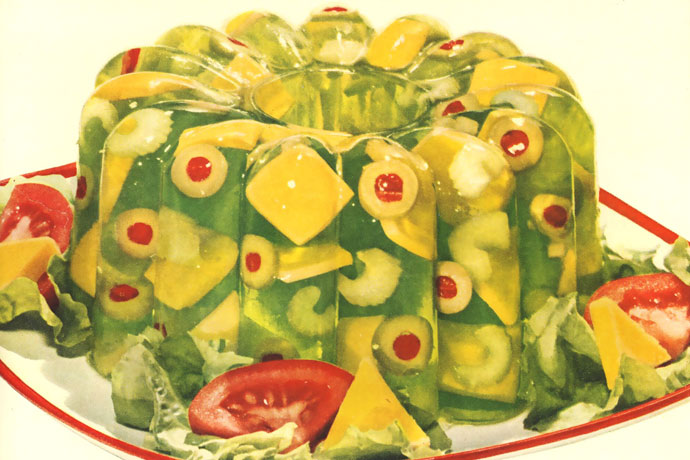 Nothing weird about that.

But it seems like every Thanksgiving, something makes the dinner table that falls outside the traditional smorgasbord of holiday treats. So we polled a bunch of UD staff to see what unexpected or just plain bizarre Thanksgiving dishes are staples in their family celebrations. Here’s what they said.

Watergate Salad. “Every year, without fail, Watergate salad makes an appearance on our Thanksgiving table. I have no idea why it’s called Watergate salad. I’m sure there’s a riveting backstory, but all I really care about is that it’s some combination of pistachio pudding powder, walnuts, Cool Whip, pineapple and those tiny marshmallows. Sounds gross. Probably should be gross. But somehow, it isn’t gross. My childhood self will be at the therapist if you need him.” —Kelly Larson

Jalapeño Cranberry Sauce. “My mom is from El Paso and makes her cranberry sauce with jalapeños. They add a nice heat to Thanksgiving and firmly root us in our Southwestern-ness while we celebrate Northeastern Pilgrims.” —Hadley Tomicki

Kielbasa. “Every Twardzik Thanksgiving (and Christmas, and Easter...) has to have an enormous plate of sliced kielbasa competing with the turkey for attention. The food itself isn’t necessarily as weird as where it comes from—a family shop in Shenandoah, PA, called Kowalonek’s Kielbasy Shop, which spawns block-deep waiting lines before every holiday. People will show up before it even opens to start the line. Others pay kids on school vacation to stand in line for them all day. It’s madness.” —Eric Twardzik

All the Desserts. “Is one dessert per person strange? Because that’s typically what we end up having at my Thanksgiving. Pumpkin pie. Pecan pie. Chocolate cake. Banana cream pie. Carrot cake cupcakes. Those chocolate turkeys in the foil wrapping that nobody ends up eating. All made from scratch. Except, you know, the foil turkeys. Those are made from CVS.” —Adam Weinberg

Carrot Kugel. “My aunt makes a highly anticipated carrot kugel every year. Despite having ‘kugel’ in the name, there are no noodles or cinnamon or any of the key ingredients included in traditional noodle kugel. It’s basically a pound cake with some carrot shavings sprinkled in, baked in a bundt shape. We pretend it’s healthy because there are vegetables in it.” —Leah Butterfield

An Italian Predinner. “We basically have an entire Italian meal before Thanksgiving dinner, complete with stuffed artichokes, my nonna’s famous lasagna and antipasti. And then comes the turkey, ham and all of the traditional Thanksgiving dishes. I don’t know why we do this, but we do. #italiangirlproblems” —Bianca Monica

Chitlins. “My siblings and I spent the majority of our childhood devouring chitterlings (pronounced ‘chitlins’). We’d get to Grandma’s and smell the literal sh*t being boiled out of these bad boys, and our mouths would salivate with excitement. They’re so slimy that I’m not even sure you chew them. I just remember them covered in Louisiana Hot Sauce and sliding down my throat like worms. I am so ashamed.” —Dionne Buxton

Shirin Polow. “My family loves rice and has to have rice involved even if there are four different varieties of potato on the table. Sometimes Persian rice makes an appearance. Shirin polow is my favorite—it’s sort of sweet and involves orange peels and slivered almonds. It pairs well with all the regular Thanksgiving sides. Shirin polow: the unexpected star of the Dadri Thanksgiving.” —Ilana Dadras

Rainbow Ribbon Jell-O. “My mom’s mother-in-law found this recipe in the newspaper back in the ’50s. She tried it for Thanksgiving using lime, lemon, orange and cherry Jell-O and it has become a family tradition ever since. Thanksgiving (and now Christmas, too) wouldn’t be the same without it.” —Elise Wrabetz

A Smart, Compact Workout System That Tracks Your Movements

How to Properly Crack and Eat a Lobster