The Cabin Down Below

The Secret Bar Below Pizza Shop 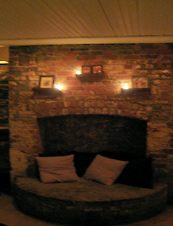 Pizza is good. But booze is better.

So forgive us if we prefer to walk into a small East Village pizza shop, ignore anything covered in mozzarella and make our way to the secret basement bar below.

Introducing The Cabin Down Below, a brand-new nook of an underground booze den that's not officially open…but, you know…open now for friends…but just on the weekends. Here, a first sneak peek inside…

Think of CDB (named after a Tom Petty song you've never heard) as a rockier, Jack Daniel's-ier version of nearly-neighbor PDT—with pepperoni replacing deep-fried mayo. Part of the budding Niagara, Black and White, Bowery Electric leather jacket empire, you'll know what you're in for when you descend those stairs: a tiny, dimly lit living room, complete with old books, trinkets and a fireplace that you can actually sit in (call it the hot seat). Not to mention, a crew of natives that were most likely within five feet of a Les Paul at some point in the evening.

Best for a late, post-rampage, East Village nightcap, swing by after the witching hour for a shot and a Bud before fading out into the night.

And if the space seems a little cramped, they've got plans to expand in the next few weeks and even add outdoor seating to their small smoker's patio.

Oh yeah, did we mention that there's a patio…