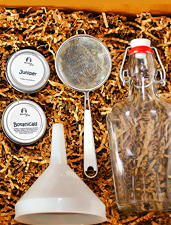 We’re lovers. You know that. But every now and again, something comes across our desks that just seems... suspicious. Because of the tremendous material upside to all our lives if these claims pan out, we at times put ourselves in harm’s way to investigate. Albeit skeptically.

THE CLAIM
A few pioneering spiritsmiths decided it was about damn time you started making your own gin. So they invented The HomeMade Gin Kit. It’s a kit. For making homemade gin. It also required further investigation. So once more into the fray we went...

THE INVESTIGATION
Our Socratic wanderings began by going online and ordering a kit. There’s only one option, so we chose that one.

A few days later, a box arrived. Its contents: two empty jugs, a strainer, a funnel and two small tins of juniper and botanicals. Then our most adroit distillation engineer was charged with the task of creating a new batch.

The instructions required the procurement of a bottle of vodka. So that happened. Then a vodka and tonic happened. Moving on. First, the juniper berries were added to the store-bought vodka bottle. Next, the botanicals (coriander, green cardamom...). A 36-hour wait commenced. And finally, they transferred the vodka into one of the jugs through the strainer.

THE VERDICT
Hey, it worked. Gin. The finished product is a bit bourbon-y in color, but that old familiar gin-y gloriousness remains intact.