Call of the Wild

Survival Training for the End of the World 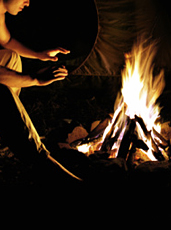 But you’ve never tracked and hunted a deer with your bare hands.

Introducing Mountain Scout Survival School, a Central Park–based wilderness crash course that’ll show you how to build a fire, purify water and turn just about anything into a deadly weapon, taking reservations now.

It begins near a heavy thicket on the Great Hill. Head due east from the hot dog stand on 109th Street and search for a big picnic blanket. It’ll be the one covered in hunting knives.

The man in charge of this operation: an eccentric former stuntman/SWAT consultant named Shane. Over the course of an afternoon, Shane will teach you how to handle virtually every emergency (or win any bar bet) using only common materials found around you. Tree bark (or a cocktail napkin...) is woven into rope, leaves are built into shelter, and a butter knife and some twigs transform into every squirrel’s worst nightmare.

It’s the Weekend at Bernie’s II of survival courses.