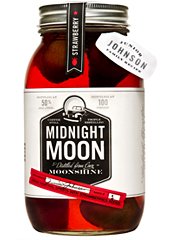 At some point in the past, a certain mountain man invented the wondrous potion known as moonshine.

A short time later, we assume, that same mountain man started drinking his new creation while eating a slice of apple pie.

In retrospect, it was only a matter of time.

Introducing Midnight Moon, a new line of fruit-infused moonshines (including one with a suspicious similarity to apple pie), available now.

First, let’s start with the shine itself: the recipe is, naturally, an old family secret of Junior Johnson, a fourth-generation moonshiner who happens to also be a stock car legend. If you’re a purist, you can take it straight, but the innovation here comes from the fruit—if you get your hands on a mason jar of the stuff, you’ll notice a little something floating inside: either a dozen cherries, a bundle of strawberries or a stick of cinnamon. (That’s the apple pie version, which also includes some apple juice; it does not, sadly, come in a juice box.)

The fruit leeches flavor into the moonshine and vice versa, so you’ll have both a potent jar of white lightning and the raw goods for a surprisingly powerful fruit plate. So the next time you’re celebrating a victorious two-mile rally against a business rival, you’ll have an equally down-home way to toast your victory.

Dune-buggy racing is the new golf.

Food & Drink
Deconstructing David Chang's Momofuku Ramen Recipe
How to Make the Famous Dish, Plus All the Noodle-Related Stats You Never Asked For