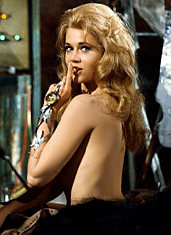 Alien, Barbarella, Blade Runner―they’re all science-fiction classics, and they all happen to include a strong woman who, for one reason or another, tends to favor somewhat minimal clothing.

Well, it’s about to get more minimal. Introducing Ladies of Sci-Fi, a burlesque show here to sex up your hallowed canon of sci-fi cinema, now selling tickets for next week’s show.

If you haven’t already guessed, this comes to you from the mind of Courtney Cruz, the burlesque queen who reimagined Star Wars with more stripping earlier this year. This time around, the show’s at Bordello, and it’s got a wide-ranging cadre of futuristic women taking to the stage, all based on characters from sci-fi classics.

And before it’s through, you’ll see beauties portraying Pris from Blade Runner, Jane Fonda from Barbarella, The Robot from Metropolis and even Samus Aran, the bikini-sporting protagonist from the video game Metroid.

Princess Toadstool had another engagement.