Hey, Your Own Private Cocktail Bar Is Rolling Up

In a Vintage Airstream, No Less 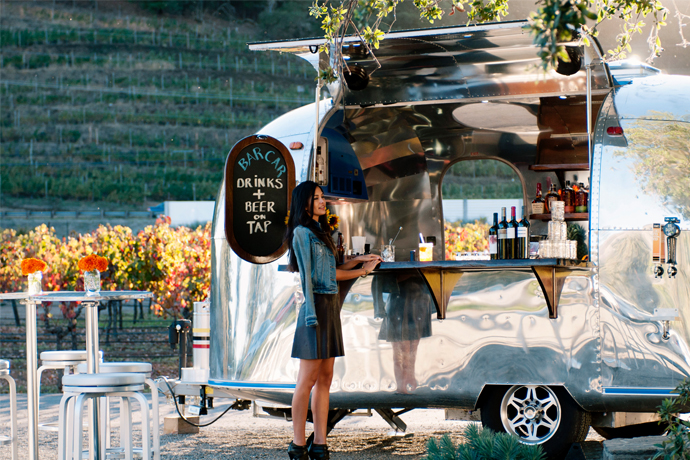 Going out to bars all these years instead of having the bar come out to you.

But the tables have turned with Bar Car, a cocktail-slinging, 1968 Airstream trailer that you can book whenever, wherever, now available from Los Angeles to Santa Barbara.

Let's say you're having a party. Or just an impromptu scotch tasting amongst friends. We aren't invited, but it's all good.

We still want this beautiful mobile cocktail haunt to show up, open its flank and reveal a stunning spread of craft beer taps and dashing bartenders in gingham who will prepare Bee's Knees, punches, Old Fashioneds and the like for everyone at a beautiful mahogany bar.

It'll make everything so much easier. You decide on a package, tell them your needs and they'll bring all the bitters and booze and fresh fruit and stuff. You won't have to make a tonic or ice run. They'll clean everything up. And they'll spur lively conversation about such things as vintage cocktails and the aerodynamics of wheeled aluminum.

But it's not just about drinks. The bar will also supply a sound system for your phone to plug into and bring games like cornhole, lawn darts and bocce.