The Whole Foods-ification of Marijuana

What an Interesting Press Release Reveals About the Future of Pot

“Marijuana has gone mainstream,” reads the first line of a thought-provoking press release we received last week from high-end Santa Barbara-based weed farm, Lowell Herb Co. “Tie-dye and pot leaves are [sic] replaced with sophisticated branding fit for an upscale boutique rather than a head shop.”

This becomes painstakingly clear in the picture Lowell sent along with the release, highlighting its slate of offerings on a picnic table one is no doubt meant to connote bucolic bliss of the company’s organic farm. Take a look: 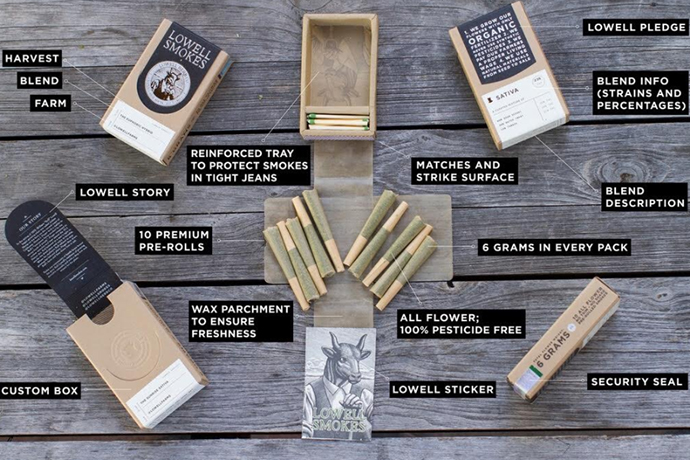 Note the earthy, khaki coloring. Note the cigarette-like packaging, whose stickers, instead of warning its users about the potential dangers of its contents, provides the blend info and the Lowell story. Note the “wax parchment to ensure freshness.” Note the “matches and strike surface,” because who among their customers would dare poison their weed with butane. And, if you haven’t already, note the “reinforced tray to protect smokers in tight jeans,” a descriptor so blatantly hipster-baiting that it may actually scare off hipsters. The branding is more aligned with artisanal granola than with what we would normally associate with weed.

That’s the point, of course. But while the corporatization—gentrification, Whole Foods-ification, etc.—of pot has been going on for some time now, Lowell, in particular, appears to have sounded the death knell for marijuana as we once knew it.

I used the word “hipster” before on purpose, because despite our collective exhaustion of the term, it’s a phenomenon that can be instructive here. Hipsters, as sociologist Mark Greif put it*, align themselves with “both the rebel subculture and with the dominant class,” thus opening up a poisonous conduit between the two. It’s easy, in this context, to see the way in which our current generation of pot dealers has sublimated America’s most prominent countercultural emblem into a mainstream, capitalist, locavore-ish entity (hipsterism, of course, is a disparate trend whose common thread is a specific relationship to consumption).

All of which begs the question: Has the increased legalization of pot sent it on an unstoppable trajectory towards becoming uncool?

It’s hard to answer, given that corporatization is a natural byproduct of legalization. And surely Lowell's weed is far superior to the shit people smoked in the sixties (or even the early aughts). But it does make me a little sad to think future generations of teens will no longer experience the thrill of smoking a (relatively) harmless drug out of an apple beyond the watchful gaze of overbearing parents. Instead, they’ll have pre-rolled joints, and wax parchment to ensure freshness, and reinforced trays to protect smokers in tight jeans.

To be fair, though, they'll probably still have the munchies.

*I find it necessary here to recognize just how oddly basic it’s become to quote Mark Grief’s famous eulogy to hipsters. But that’s a story for a different article.

Gear
The Two Futuristic Grills You'll Need This Summer
One Does It All. The Other Goes Wherever You Go.

Gear
This Smart, All-Seeing Robot Will Help You Cook Better Meals
Cooksy Attaches Above Your Stove to Provide Real-Time Guidance and Step-by-Step Recipes

Gear
Make Fresh Cold Brew at Home in 90 Seconds
Put Osma on Your Counter for a Steady Stream of Good, Fast Coffee