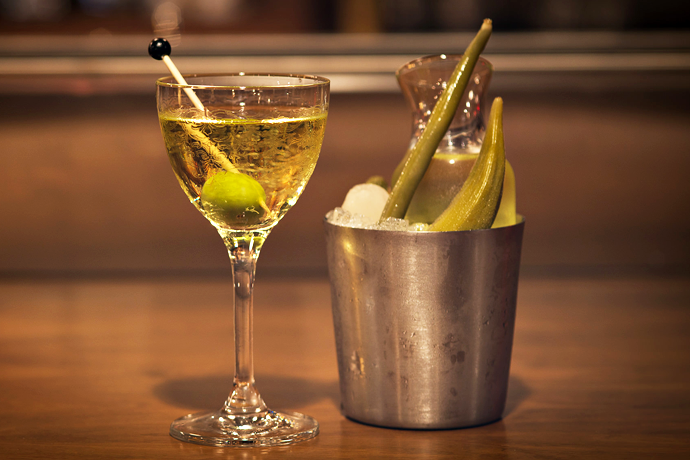 It’s tempting to say these names are essentially irrelevant to your life.

But we’re actually talking about drinks.

Collect them all at Birds & Bees, an attractive underground haunt set in the 1950s and serving just such alcohol-related marriages, opening tomorrow beneath Downtown. Take a look.

Fight Club meets Don Draper’s penthouse. That’s one way to describe this place. There are probably others. Regardless, make reservations, locate the secret entrance and descend below an anonymous Broadway building.

You’ll eventually open a yellow door that leads to a comely underground arrangement of mid-century furnishings amongst the industrial ruins of a former LAPD gym. Then you’ll approach the brass-and-walnut-accented bar.

That’s where Marcos Tello and team will be concocting some delicious 1950s cocktails for your troupe, displayed in a menu resembling a vintage periodical. You’ll select something like the old Hotel Astor’s triple-rum Cloak & Dagger, punch served from a giant glass pineapple or the Korla Pandit with butternut-squash-infused rum, masala-infused cognac, lemon and orange liqueur.

You’ll bring that into the sunken living room to the bar’s left and sit by the dangling orb fireplace, chatting as you snack on the cake of the day or some housemade Chex Mix.

Chex Mix and a fireplace. And they say you can’t have it all.