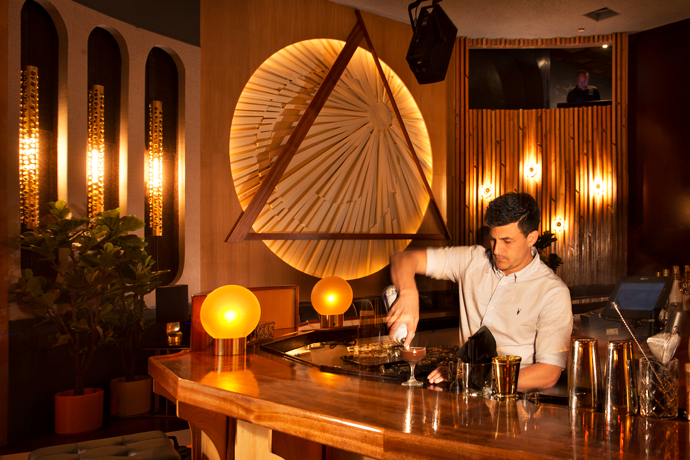 7 Photos The Peppermint Club
Things are different in 2017.

January is apparently no longer synonymous with beach days in California.

And you drink whiskey backed by your own live soundtrack at this place now.

Scenario the last brought to you by the Peppermint Club, a swinging new live music roost born of the righteous partnership between Interscope Records and H.Wood Group of Delilah/Nice Guy fame, now open in West Hollywood. Take it all in.

Imagine Top of the Pops fused with George Martin’s den. You might get something like this intimate, Kubrick-ian lounge clad in fir, cork ceiling tiles and velvet banquettes.

And it will be the ideal place to escort dates and friends who demand their music be played by actual instruments. Make your reservation online, then appear sometime after dinner. Order everyone the Billboard with Virginia Black whiskey, muddled strawberry, honey, soda and lemon juice. Repeat until a band hits that stage, which somehow manages to resemble a 1967 man cave.

About the band. It could be a rock quintet. Or maybe an ’80s cover band of legendary local repute. And, of course, you never know who may drop by in the late hours.

It probably won’t be Dylan.