Super Soakers and Skeeball and Bourbon and Ribs

It’s Like the Beach, Just with Better Drinks and More Games 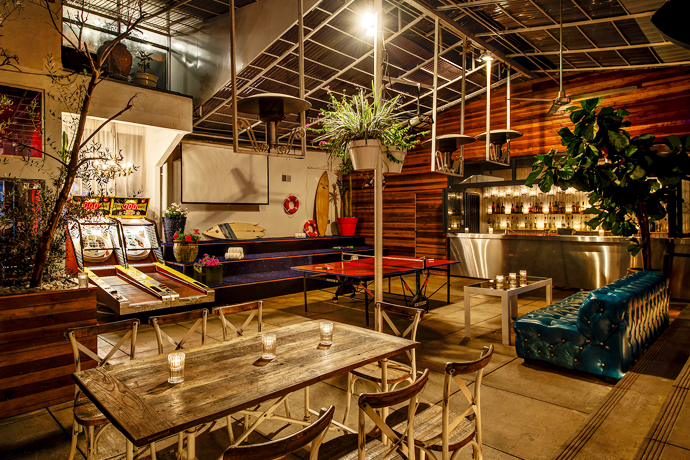 But it sounds more like Sandbox, a new Melrose hangout where burgers, barbecue and chipotle-honey bourbon drinks gloriously collide with all of those things up there. It’s soft-opening tonight ﻿from Silver Lake’s Charcoal and Barbarella owners. Here’s what it looks like and here’s the menu.

You probably hung out here back when it was Bungalow or Bugatta. Now, it’s a tasteful little beach bonanza with a lifeguard tower out front, surf paraphenalia artfully strewn about and that same celestial back patio for drinking and eating in banana leaf-painted cabanas.

Maybe you’ll come for weekend brunch with DJs and bottomless mimosas. Or after work with friends for a few Wipe Outs (bourbon, chipotle honey, flamed lemon peel) that lead to goat cheese pizzas and St. Louis ribs, which necessitate some beers. It’s a vicious circle.

But that’s the thing. You don’t have to leave this place once you’re satiated. They’ve seen to that by filling it with things like Skeeball, movie screenings and ping-pong out on the patio. And Pac-Man, Tron and pinball machines themed after Kiss and Ghostbusters in the front.

Someone should open a bounce castle bar. Just saying.